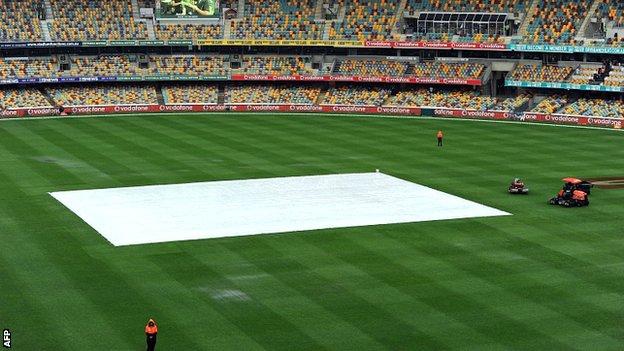 Heavy rain in Brisbane prevented any play on day two of the first Test between Australia and South Africa.

After the opening day was brought to an end by bad light with South Africa on 255-2, conditions worsened and the covers were on all day at the Gabba.

Play was finally abandoned soon after 16:00, and the Test will resume half an hour earlier than scheduled on Sunday.

South Africa will be a batsman short after JP Duminy was ruled out for up to six months with ruptured Achilles.

In addition to his batting, with a Test average of 37.53 from his 16 matches, Duminy was also expected to play a key role with his off-spin after specialist spinner Imran Tahir was dropped to allow for a fourth pace bowler.

The 28-year-old, who has taken 12 Test wickets with a best of 3-29 against England in Durban in 2009, was kicking a rugby ball and running with team-mates in a warm-down after the opening day at the Gabba when he slipped and ruptured the tendon.

The rupture was confirmed by an MRI scan and Duminy will return to South Africa as soon as possible after an operation on Saturday.