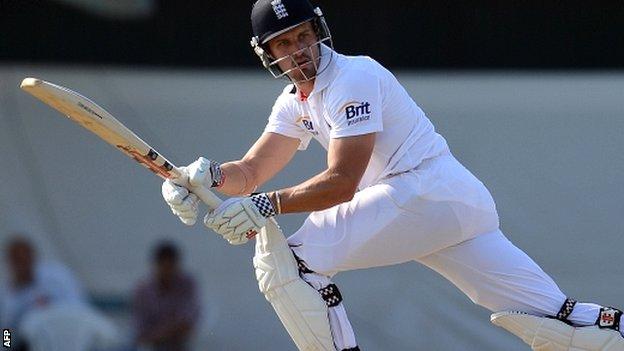 Nick Compton enhanced his Test claims with an unbeaten 54 as England closed the penultimate day of their final warm-up game against Haryana at 118-0.

After beginning the tour with nought and one, the opener has hit 192 runs in three innings and looks certain to play in Thursday's first Test with India.

England's bowlers toiled for 113.4 overs as Haryana made 333, opener Rahul Dewan making a near eight-hour 143.

But Jonathan Trott (61) and Compton gave the tourists a 306-run lead.

Despite his confidence with the bat, 29-year-old Somerset batsman Compton, grandson of legendary England batsman Denis, dropped a routine chance in the field - one of several lapses from the tourists in the sapping heat.

As Haryana resumed on 172-4, Tim Bresnan gave England early encouragement on the friendly surface as Sandeep Singh edged low to Alastair Cook at slip in the third over.

Replacement seamer Stuart Meaker, brought into the team as cover for Steven Finn, found the edge of Amit Mishra to collect his maiden first-class wicket for England but the dogged Dewan remained, reaching three figures with his 14th boundary.

Meaker breached Jayant Yadav's defences to remove his off-stump and the 23-year-old Surrey seamer would have added the scalp of Amit Vashisht had Matt Prior managed to hold a diving catch down the leg-side.

While Compton and Trott opened the batting, Cook sat deep in conversation with coach Andy Flower. The selection headache still revolves around the bowlers and while Bresnan and Meaker picked up three wickets each, Onions didn't get the breakthroughs England might have hoped for and you felt very little was learnt overall. Finn at least had no adverse reaction to bowling off his full run yesterday.

Prior was fit to keep wicket again after the discomforts of a sickness bug on Friday but was uncharacteristically untidy behind the stumps.

Vashisht was reprieved again when Compton spilled a far more glaring chance at point off Graham Onions, although the error cost only five runs as Samit Patel trapped him leg before while pushing forward.

Number 10 Chanderpal Saini, playing in only his second first-class match at the age of 25 after a debut last week, made 35 in a ninth-wicket stand of 62 which was finally ended as Meaker collected his third wicket, and Kevin Pietersen ended the innings by having Sanjay Budhwar caught in the gully.

There was still enough time for Compton to impress again at the crease, his big stride in forward defence and off-drive particularly dominant.

With Trott promoted to open as Cook rested following his 97 in the first innings, both England batsmen reached half centuries from 98 balls.

Asked about his unexpected call-up Meaker said: "It was a bit of a surprise phone call, I suppose. It's never nice to hear it's because one of your fellow players has gone down through injury.

"But it's a great chance for me personally to show the guys what I've got - and luckily, I've shown them I can take a few wickets out here.

"I look at it more long term, a great chance for me to show the new Test captain I can perform in these conditions - and that will bode well for a future Test call."

Finn bowled off his full run-up on Friday as he recovers from a thigh injury, and Meaker said: "He's getting closer and closer to being ready."

Of Compton's capabilities Meaker added: "He's a very gifted batsman, and the runs speak for themselves in the County Championship and out here.

"I think he'll do well for himself. But only he can decide how well he does in that first couple of games.

"It's great for him, and great to see the hard work he's put in during the Championship has paid off for him here.

"I'm really pleased for him that he's going to be given that chance to prove himself."