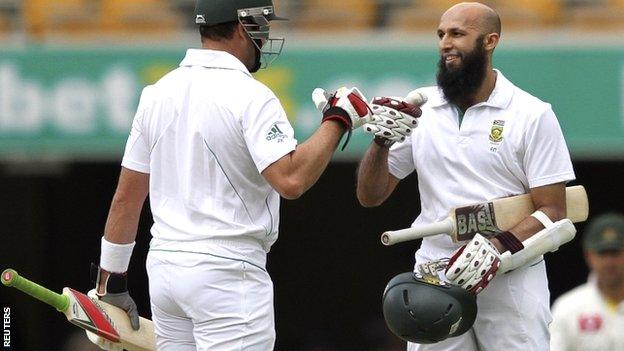 World number one side South Africa maintained the upper hand in the first Test as Australia closed day three in Brisbane 339 runs behind at 111-3.

After the tourists resumed on 255-2 and Hashim Amla took his stand with Jacques Kallis to 165.

Their pacemen then took three wickets inside 10 overs, Ricky Ponting out for a fifth-ball duck, before Ed Cowan and Michael Clarke shared an unbroken 71.

After a day under the covers, the Gabba pitch showed tinges of green and Amla, who made a triple century in the series victory against England earlier this year, was circumspect in completing the 10 runs he needed for his 17th Test hundred.

Shortly afterwards he was trapped lbw by Peter Siddle and the batsman chose not to review the decision, although Amla would have been reprieved as replays showed the ball passing over the stumps.

Kallis, 37, playing in his 156th Test, recorded his fourth hundred of the year in the next over and shared another significant stand of 90 with AB De Villiers before he was caught in the gully in the fourth over after lunch.

Kallis then collected his 189th Test catch when Warner prodded to him at slip off Dale Steyn in the fifth over.

Rob Quiney's debut Test innings lasted 12 balls before he hooked to fine-leg where Steyn took the catch on the boundary, flicked it up as he neared the rope, then caught it again as he re-entered the field of play.

Former skipper Ponting edged a sharply rising ball from Morne Morkel to Kallis at slip before left-hander Cowan moved within a single of his fourth Test fifty, sharing a purposeful stand in 16 overs with skipper Clarke who finished not out on 34.

Meanwhile, the South Africans have confirmed that uncapped all-rounder Dean Elgar will replace Duminy for the remainder of the three-match series

Elgar, 25, has played five one-day internationals, the most recent of which was against England in August.