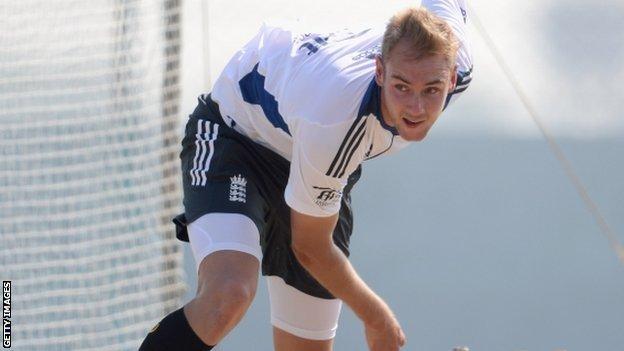 England will not play fast bowlers Stuart Broad and Steven Finn in Thursday's first Test against India unless they are 100% match fit.

Vice-captain Broad bowled in the nets on Sunday for the first time since bruising his heel, while Finn continued his recovery from a thigh strain.

"We must go into the game with a fully-fit attack," said captain Alastair Cook after England drew with Haryana.

"Jonathan Trott's century - albeit against weak opposition - confirms that all of England's top six have found form in these warm-up games. Things will be very different in the Tests, though, when they come up against India's specialist spinners. Amit Mishra didn't bowl at all in the second innings for Haryana. The fact that Broad tested out his bruised heel by bowling in the nets for the first time was encouraging for England, but doubts still remain as to whether he and Finn can get match fit before Thursday, having only bowled 14 overs between them in the warm-up games."

Stuart Meaker, who was called into the squad to cover Finn, will be in consideration for a place in the team after playing in the four-day tour match against Haryana.

Spinner Graeme Swann will be back with the squad on Monday after spending four days in England with his wife while his baby daughter was unwell.

Jonathan Trott retired unbeaten on 101 after making England's fifth century in three matches, but fellow opener Nick Compton fell short of his hundred when he was dismissed for 79.

England declared on 254-7, but struggled to take wickets on a flat and unresponsive surface.

England's lack of exposure to quality spin over the past two weeks is another area of concern as they fine-tune preparations for the four-Test series against India.

"We've had an excellent three games. Everyone's played, and we've got some really good practice out of it," said Cook.

"Clearly, we'd like to have won a game, but sometimes common sense has to be used. There's no point busting a gut on a really flat wicket, with a Test match just round the corner, especially with a few injury concerns for our fast bowlers.

"We can't control the opposition, or the standard of the opposition. We would certainly have liked to face more spin in the matches.

"But if anyone was watching our training sessions while these games have been going on, we've had some good spinners bowling at us in the nets.

"Yes, we'd rather have had them in the middle. But we've made do, and all the lads have put in some really good practice."