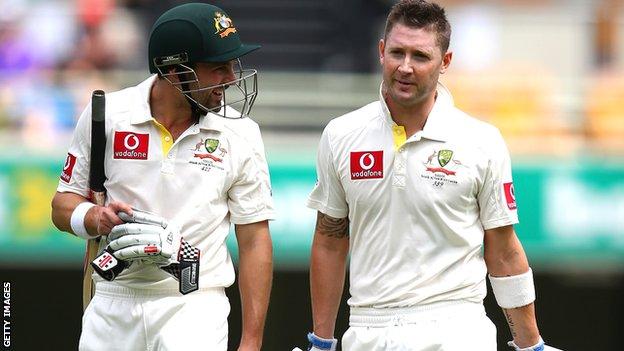 The hosts began the day on 111-3, still 339 runs behind South Africa, having lost the second day to rain.

Left-handed opener Cowan, in his eighth Test, compiled 136 before being run out backing up at the non-striker's end.

Clarke, who made the first triple century at the Sydney Cricket Ground with an unbeaten 329 against India in January, is comfortably the leading Test run-scorer this year and had reached exactly 1,000 runs for 2012 by the close.

Skipper Graeme Smith, who took the last of his eight Test wickets in 2005, was forced to send down nine overs, Hashim Amla bowled for only the fifth time in a Test match and Alviro Petersen was also pressed into rare service.

Cowan got the single he needed to reach 50 in the first over, and Clarke followed him with a square drive off Test debutant Rory Kleinveldt shortly after, which also recorded the 100 partnership.

Progress was sometimes slow, Australia going more than 16 overs without finding the boundary at one point, but Cowan was given a hand when he was credited with a four which took him to 98 in the penultimate over before lunch, when the ball actually came off his helmet.

By the interval, the partnership, which began on Sunday with Australia in difficulty on 40-3, had reached 174, and soon after the resumption Clarke struck three fours in a Morne Morkel over to move into the 90s.

A mix-up between Dale Steyn and Jacques Rudolph in the deep saw Cowan dropped on 123, but Steyn triggered an unfortunate demise for the opener just before tea when he touched a Clarke drive onto the stumps, with Cowan out of his ground at the bowler's end.

The South Africans toiled overall, however, and their exasperation increased in the final session with a wasted review on a caught-behind appeal, when replays showed the delivery from Vernon Philander made no contact with Clarke's bat.

Then, with the Australian captain on 135, there was an clear inside edge through to wicketkeeper AB de Villiers but bowler Morkel had over-stepped and a no-ball was called.

Clarke reached his double century with an immaculately timed on drive boundary off Steyn and shared 188 in just 36 overs with the redoubtable Mike Hussey, who reached his 29th Test half century in only 68 balls and finished 14 short of his 17th hundred.

Skipper Clarke finished 17 runs short of the highest Test score at the Gabba, Alastair Cook's unbeaten 235 in 2010, and had high hopes for Tuesday's final day.

"I definitely think we can have a crack at winning," he said. "The key is tomorrow morning to be nice and positive and see how we go leading up to lunch, and then give ourselves a couple of sessions to be able to bowl South Africa out."