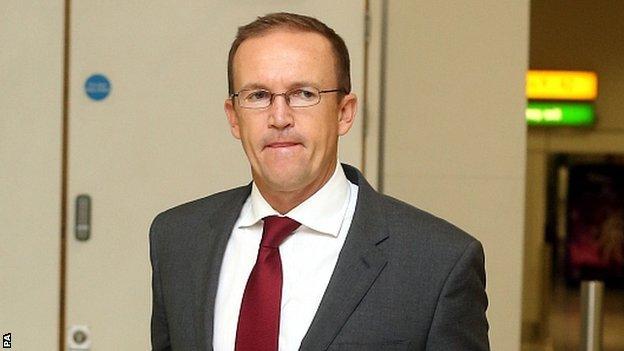 England face India in Test and one-day series either side of Christmas.

They then play New Zealand home and away before the Champions Trophy and back-to-back series against Australia.

"With the fixtures over the next 18 months it would only be right for Andy to have a break at some stage alongside some senior players," said Halsall.

Zimbabwean Flower took over as England coach in April 2009 and has masterminded victories over Australia in the last two Ashes series.

A renowned workaholic, Flower was told to sit out the last one-day international of the summer in September to spend time with his family, with Halsall taking over the reins.

"I'm sure decisions will be made along the lines of who would be right to come in for possibly a series," he told BBC Sport.

"I think with all our senior men, to keep them involved in England cricket as long as possible, some decisions are going to have to be made - including the coach."

Halsall said it would be "fantastic" to be asked to step into Flower's shoes again, but was sceptical over his own credentials.

"I think that role as team director as opposed to assistant coach is vastly different," he said. "Stepping in for the odd game at the end of a series once all those routines have been set up and the major decisions have been taken is fine.

"If they were to ask me to do it that would be fantastic but I think those decisions would be made further down the line."

England cricketers including fast bowler James Anderson and former captain Andrew Strauss have been rested for series in the past to help keep them fresh.

Halsall said he had not discussed the possibility of a break with Flower.