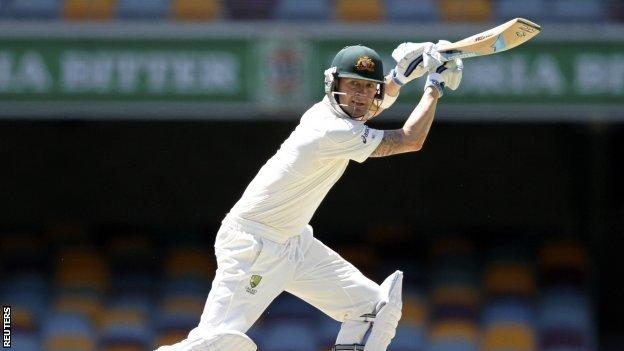 South Africa survived the final two sessions to draw the first Test of the three-match series in Australia.

Australia captain Michael Clarke hit an unbeaten 259, the highest Test score at the Gabba in Brisbane.

Michael Hussey completed his 17th Test ton to help the hosts declare on 565-5 - a first-innings lead of 115.

Alviro Petersen and Graeme Smith fell either side of lunch, but Hashim Amla (38) and Jacques Kallis (49) dug in as South Africa finished on 166-5.

"Credit to Michael and the way his team batted. They put us under a little bit of pressure on the last day but we held on," said South Africa captain Smith.

"The challenge for us was always going to be the first Test, to get into the series, and we've done that and we can go on to [the second Test in] Adelaide [on 22 November] with confidence.

"We know as a team we're capable of playing better than this."

Australia needed only four more wickets to wrap up victory over the number one Test nation because JP Duminy was unable to bat after rupturing his Achilles tendon earlier in the Test.

However, Clarke, who earlier eclipsed England captain Alastair Cook's 235 not out at the Gabba in 2010, elected to halt the game with 11 overs remaining.

"Our attitude was spot on with the ball," said man of the match Clarke. "We were quite aggressive with our approach. We bowled a lot better and we seemed to get better through this Test match."

Clarke resumed on the final morning on 218 and he and Hussey, who brought up his century off 128 balls before being caught next ball at cover, racked up 40 runs in eight overs.

After a slow start to his innings, Matthew Wade hit three fours to reach 19 before Clarke's aggressive declaration.

The move appeared justified when Petersen was caught behind for five off the impressive James Pattinson, who also bowled Amla before lunch off a no-ball.

Pattinson picked up the prized wicket of Smith for 23 after lunch, tempting the left-handed opener to chase a wide delivery which he edged to Rob Quiney at gully.

But the Australians ran out of referrals in the afternoon session after unsuccessful reviews for caught behind decisons against Amla and Kallis.

Off-spinner Nathan Lyon went for 26 runs in his first two overs - Kallis plundered a six and two fours in the second - as South Africa closed in on making Australia bat again.

Amla eventually fell for 38, caught by Hussey off Peter Siddle before tea, as the tourists took tea on 114-3, trailing by one run.

Kallis fell one short of his half-century but AB de Villiers dug in for a 114-ball 29 not out and, although Lyon had Jacques Rudolph lbw for 11, South Africa held on.