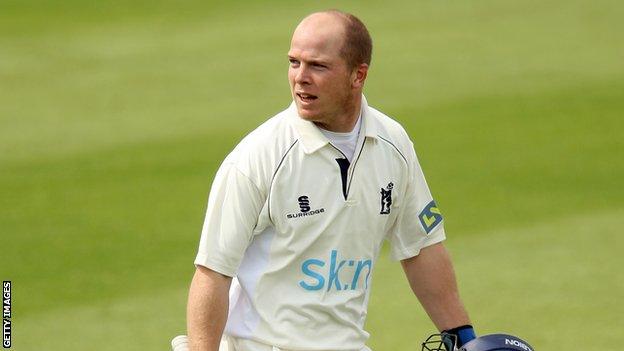 Tim Ambrose has revealed Warwickshire are determined to bring more silverware to Edgbaston after winning the County Championship this season.

Ambrose recently signed a new deal at the club, and says he wants to continue the progression at the county.

"There's certainly the feeling, while we have achieved things, we want to go on for more," he told BBC WM.

There was huge disappointment to miss out [in 2011] but there were so many positives to be taken from the effort that was put in that year.

"We've worked hard to get the club back to where it is - we're really pleased of the direction that we're going."

He continued: "It's something we are all very proud of and I don't think you can walk away from things like that too lightly.

"I'm absolutely over the moon to be able to try and push that on in the next three years."

The Bears lifted the Championship trophy for the sixth time following victory over Midlands neighbours Worcestershire, in a game which effectively relegated their opponents.

The win put to bed memories of their 2011 campaign, where they cruelly missed out on the title on the final day of the season to Lancashire.

And former England international Ambrose has revealed that their narrow miss only served as an added incentive to lift the domestic game's most coveted trophy.

"It certainly did focus our resolve," the 29-year-old said. "There was huge disappointment to miss out but there were so many positives to be taken from the effort that was put in that year.

"We had a lot of confidence in the way we were playing as individuals, and we worked hard in the winter to improve.

"We knew exactly what we needed to do to go that one step further."