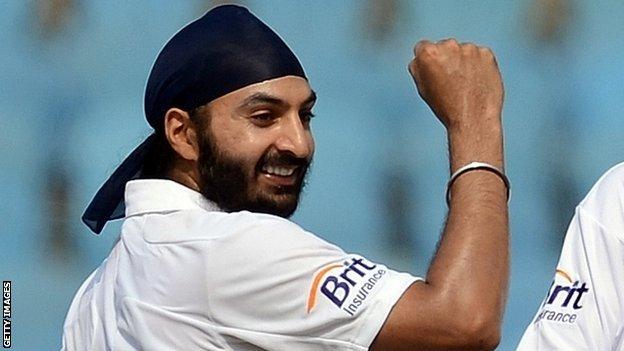 England look set to field part-time spinner Patel at number six to balance the side and support Graeme Swann.

But Dravid told BBC Sport: "Bits and pieces cricketers haven't had much of an impact in India.

"Monty has bowled well in India in the past and can keep one end tight so I would like him to play."

Left-arm spinner Panesar has taken 142 wickets from 42 Tests, including 11 in India, and has a first-class bowling average of 30.32.

Fellow left-armer Patel averages 38.71 with the ball in first-class cricket and has three wickets from two Tests but can bat at number six to give England the option of fielding an extra bowler.

He has featured in all three of England's warm-up matches on tour, scoring one century and two fifties.

Panesar played two of the matches but was not used in tandem with first-choice spinner Swann, who flew to the United Kingdom last week to visit his sick daughter before returning to India in time for Thursday's series-opener in Ahmedabad.

"Indians are extremely good players of spin and they are not going to get out to part-time bowlers.

"I guess England have a problem because they don't have that genuine all-rounder to bat at six like Andrew Flintoff, but if the tracks look like they might turn then I would play both the specialist spinners."

England have and have lost three of their last four series there.

Their only Test victory in that time came in Mumbai in 2006 when Flintoff's England bowled Dravid's India out for 100 on the final day to draw the series 1-1.

England's hero back then was Hampshire off-spinner Shaun Udal, which Dravid says is further evidence of the match-winning potential of spinners on the subcontinent.

"As we saw in Mumbai, the wickets can deteriorate quite appreciably," said Dravid, who will be a BBC Test Match Special summariser during the Test series.

"It will be critical to see how many runs they can score and see if they can give Swann or Panesar a chance in that fourth innings to have a go at some of the young, inexperienced Indian batsmen."

Former England spinner John Emburey disagreed with Dravid, arguing that Patel could be a success on subcontinental pitches.

He cited England's 1-1 draw with Sri Lanka earlier this year, when England's only victory came after Panesar had been dropped.

"Although India has got this reputation for turning pitches, we've never really benefited from playing two spinners on those pitches and neither have many other countries," said Emburey, who claimed eight wickets in five Tests in India between 1980 and 1993.

"When Swann and Panesar played together in Sri Lanka we lost one and drew one and when we played one spinner we ended up winning that match and drawing the series.

"I'll be doing everything I can to show the coach and captain what I can do and prove that I am ready to perform if selected.

Winning a series in India is one of the toughest tasks in cricket. To do it we'll need the batsmen to score 500 runs and the bowlers to keep the run rate down, create pressure and take wickets.

That is the goal and everyone in the squad believes we can do it."

"England are worried about getting runs on the board and I think they will go in with Samit Patel as a second spinner. I think he will be very good in India. He is a good player of spin and scores runs quickly."

England whitewashed an India side featuring Dravid 4-0 at home last year to usurp them at number one in the world Test rankings.

But Dravid, who retired from international cricket in March, is playing down talk of revenge.

"I don't think cricket teams should be focusing on trying to get revenge," he said.

"Obviously it was a huge disappointment to lose in England last year. It should have been a great contest and we didn't play particularly well.

"India would like to prove that they are still a formidable side at home. They will back the fact that they have got quality spinners and batsmen especially for these conditions and look to beat England purely on skill."

Dravid believes England's performance in the opener in Ahmedabad could set the tone for the whole series.

"If England can do well in the first one it will set up a great series but if they let India run away with it, then they could be in trouble," he said.

"I think all four Test matches will have results and tip India to win 3-1."

Dravid will be working as a summariser for BBC Test Match Special during the Test series.