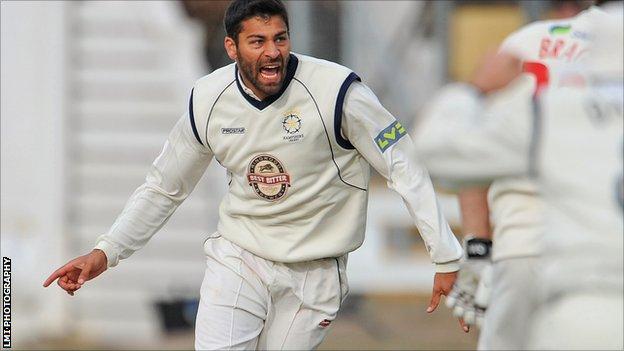 Hampshire all-rounder Hamza Riazuddin has signed a new one-year deal which will keep him at the Ageas Bowl until the end of next season.

"It's definitely exciting, the club is moving forward and won two trophies last year and is a great place to be," Riazuddin told BBC Radio Solent.

"I think I've got something in me to move forward."

At the beginning of the 2012 season, Riazuddin took his first Championship five-wicket haul for the club against Glamorgan at the Swalec Stadium in Cardiff and in the same match, he also hit the winning runs in a dramatic penultimate-ball thriller.

However, he was on the periphery of the first team for much of the summer and admitted it has been a frustrating time.

But he hopes the departure of Kabir Ali to Lancashire might increase his chances at the Ageas Bowl.

"It has been tough in terms of development but I think I made some leeway last year at the start of the season.

"I need to be realistic and I'm sure opportunities will be just around the corner," he said.

"Kabir is a big player and he didn't play every game last year but he played quite a few and I guess that is another space that might open up and his departure may help me."

Hampshire manager Giles White added: "Hamza performed when he was called upon last year and 2013 offers him the opportunity to push on and stake a claim for a more regular first team place."