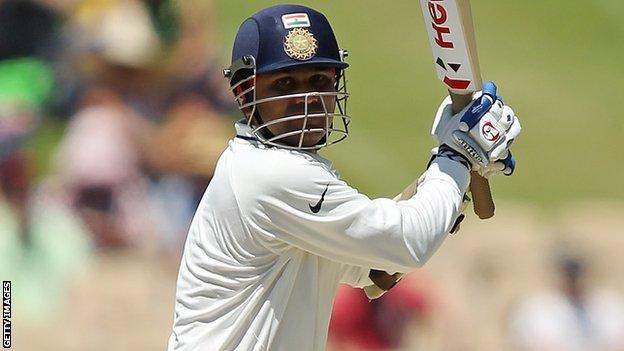 Virender Sehwag smashed a rapid century as India enjoyed the better of the opening day of the first Test against England in Ahmedabad.

But the tourists were hampered by some poor fielding, with four catches missed.

"It was a good toss to win. I didn't expect England to have a better day than they did as sometimes you might only get two wickets on a day like this. Swann bowled very well. The seamers looked fairly straightforward - I won't say innocuous - but the ball hardly went off the straight."

The most costly came when Pujara, on eight, got a leading edge off Tim Bresnan. James Anderson rushed in from mid-on, only for the ball to loop over his head.

That and a tickle down the leg side from Sehwag off Anderson that was dropped by diving wicketkeeper Matt Prior were the only chances England's trio of pace bowlers created on a slow, low pitch that is already taking turn.

Indeed, the signs of deterioration and the fact the impressive Swann got through 32 overs may cause new captain Alastair Cook to rue the decision to leave out left-arm spinner Monty Panesar.

Samit Patel provided England with a second spinning option but, with the Nottinghamshire all-rounder largely ineffective, he will have to justify his selection through weight of runs, particularly with the tourists set to bat last.

Patel did, however, play his part in tandem with Swann as England managed to apply some pressure in the evening, as India's scoring rate slowed almost to a standstill.

Only 73 runs came in the final session, in marked contrast to the morning when Sehwag took advantage of England indiscipline.

India batsman Sachin Tendulkar is playing his 191st Test, 23 years to the day since his debut against Pakistan

Losing what could prove to be a vital toss in his first match since being appointed Test captain, Cook may not have expected his pace bowlers to extract any movement, but would have been disappointed by their inability to find any consistency of line or length.

Too often Sehwag was allowed to flay through the off side, before highlighting the slowness of the track by lofting Bresnan over long-on for six.

Dropped by Prior on 80, he completed his first Test century for two years off only 90 balls, the seventh time he has reached three figures in the longest form of the game at better than a run a ball.

Gautam Gambhir was nowhere near as fluent, struggling against Swann in particular.

He offered a catch and stumping chance to Prior off the same Swann delivery - both were missed - but later that over he was bowled as he tried to force through the off side, ending an opening stand worth 134.

"On the evidence of today, England might see a lot more of Pujara in the future. It's been India's day, right from winning the toss. England fought back well in the last session but India will be extremely happy with 323-4 on a wearing wicket."

His dismissal brought Pujara to the crease and, except for the chance in Anderson's direction, he and Sehwag compiled a second-wicket partnership of 90 with some ease.

Such was their progress, it came as a shock when Sehwag, needlessly attempting to sweep, was bowled, giving Swann his 194th Test wicket and taking him past Jim Laker as England's most successful off-spinner.

A combination of those wickets and improved England bowling saw India grind to a halt after the interval, with Virat Kohli taking 30 balls to get off the mark.

He benefited from a drop off Swann, as replays showed the ball was grounded when Jonathan Trott juggled and fell at slip.

Shortly after, Kohli was bowled by one from Swann that turned sharply through the gate as England looked like they might end the day with a flourish.

However, Pujara, joined by Yuvraj Singh, stood firm and England will have to make swift inroads with a ball that is only four overs old if they are to avoid being batted out of the match.