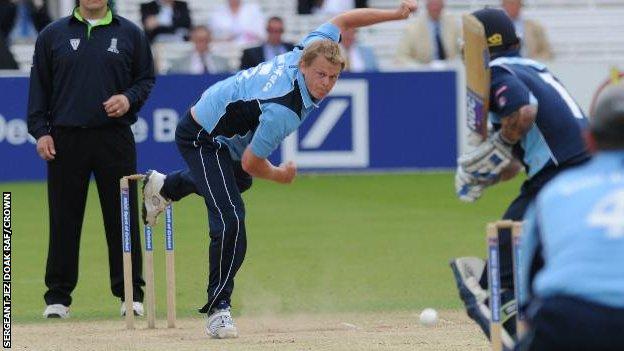 Worcestershire's new signing Graeme Cessford says he will use his experience from the Royal Air Force to help bring discipline to New Road.

Bowler Cessford has taken a year out of serving as an RAF Corporal to play for the Division Two side.

"I'm hopefully going to bring some of my background to the club," the 29-year-old told BBC Hereford & Worcester.

"I can bring a bit of discipline, which [director of cricket] Steve Rhodes has asked me to do."

And despite having no previous experience of the professional game, he says his team-mates have helped him settle in quickly at New Road after signing for the 2013 season.

"Everybody is really friendly down there which is one of the main things I noticed in the first few games I was playing, everyone was really helpful," he said.

"It will a be a tough decision next year to see what I will be doing next year."