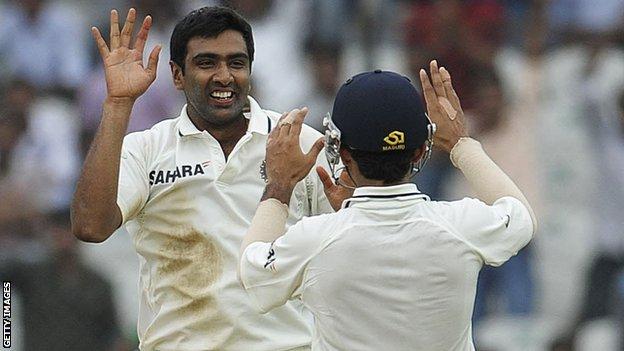 England are facing defeat in the first Test against India after another inept attempt at dealing with spin.

Matt Prior showed some fight with 48, but England's pitiful effort was epitomised by Kevin Pietersen and Ian Bell falling to successive Ojha balls.

The tourists at least fared better following on, reaching 111-0, but are 219 short of making India bat again.

"England are still in a huge hole and the odds against them saving this match are very long, but they'll be a bit more cheerful tonight. They've shown it's possible to score runs out there if you keep your head. Earlier today, we thought it might finish on the third day - now we're not sure if it will finish on the fourth."

Openers Alastair Cook and Nick Compton mixed defence with endeavour in batting through an elongated evening session, but the damage done in the first innings leaves England staring at a seventh loss in 12 Tests this year.

Just as in the 3-0 Test series defeat by Pakistan and the World Twenty20 in Sri Lanka, England looked baffled by high-quality slow bowling, caught between shotless defence and reckless attack.

The dismissals of Pietersen and Bell were England versus spin in microcosm. First, Pietersen's open face was beaten by a ripping delivery that took out his middle stump then, inexplicably, Bell charged his first ball and was caught at deep mid-off.

Ravichandran Ashwin finished with 3-80 as India's probing spinners made a mockery of England's decision to field only one specialist slow bowler in Graeme Swann.

The skiddy Yadav extracted life from the slow pitch, while Zaheer found the reverse swing that eluded England. Yadav trapped Samit Patel lbw, with Zaheer doing the same to Broad, although both looked to be going down the leg side.

On both occasions Prior was the man watching on from the other end, and it was he, along with Cook, who looked the best equipped of England's batsmen to deal with spin on a turning wicket in Ahmedabad.

The wicketkeeper offered one chance to deep square leg when he pulled a full toss to Zaheer, but after that looked comfortable driving, cutting and sweeping.

He shared stands of 47 with Bresnan and 43 with the aggressive Broad, before being bowled trying to drive Ojha to become the last wicket to fall.

Cook and Compton, following Prior's example, then batted 38 overs to have India retreating for the first time in the match.

Cook, who looked accomplised in the first innings before edging a drive off Ashwin to slip, was again adept at judging length.

He survived a strong lbw shout from Ojha, but regularly cut through the off side on his way to an unbeaten 74.

Debutant Compton was more circumspect than his captain, showing all the application and determination evident during his prolific season for Somerset in poking and nudging his way to 33.

Despite the fightback, England's horrific first-innings effort means that, after only three days, defeat seems inevitable.