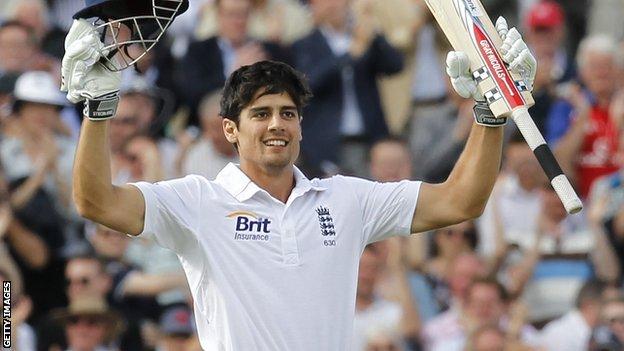 A defiant century from captain Alastair Cook ensured England's battle to save the first Test against India in Ahmedabad will go into the final day.

England looked to be heading for defeat when Ian Bell and Samit Patel fell to successive Umesh Yadav deliveries.

"I am running out of superlatives with which to describe Alastair Cook. His hundred on the fourth day of the first Test against India was a fantastic display of concentration, determination and stamina. The way he has begun his reign is utterly remarkable, leading from the front in his own quiet, undemonstrative way."

But Matt Prior (84 not out) arrived to add an unbroken 141 with Cook, raising English hopes of an unlikely draw.

The efforts of the sixth-wicket pair, the only two England batsmen to get to grips with the India attack on a slow track, denied the hosts what could have been an innings victory with a day to spare.

They came together with England 199-5 - 131 short of making the home side bat again - and first negotiated the reverse-swinging old ball, then saw off the new, before taking England into the lead as the bowlers tired.

Cook, who survived a strong lbw shout late on day three, did not offer India a chance in his determined bid to ensure his first Test since being appointed Andrew Strauss's successor does not end in defeat.

Time and again the left-hander worked the ball through the leg side, at one stage going almost two hours without finding the boundary.

He brought up three figures in just that fashion, clipping Yadav for a couple to become the first player in Test cricket to mark his first three matches as captain with a hundred, having scored two tons when standing in for Strauss in Bangladesh in 2010.

Alastair Cook has scored a century in each of his three Tests as England captain:

While Cook was immovable, the rest of England's top order crumbled, just as they had on day three when the tourists were bowled out for 191.

Nick Compton, who shared a century opening stand with his skipper on Saturday, did not look as assured on day four and should have been stumped by Mahendra Singh Dhoni before he was trapped lbw by a Zaheer Khan inswinger.

Jonathan Trott feathered a turning delivery from Pragyan Ojha behind, while Kevin Pietersen lost his off stump sweeping the left-arm spinner.

Bell, who is due to return to the UK after this Test to attend the birth of his child, briefly supported his captain, showing more composure than his first-ball dismissal in the first innings.

However, with Yadav finding reverse swing, Bell and Patel fell to balls that tailed back in to them, although Patel may have got an inside edge to a delivery that looked to be heading down the leg side.

"Thankfully we've convinced ourselves that it's not a minefield, we can play on it and just because there's slow turn, it won't get you out every time."

At that stage, it appeared as if Cook would be unable to find a willing ally in his rearguard, but that was to discount the reliable Prior, who top-scored in the first innings with 48.

He initially reined in his attacking instincts, but showed typical strength through the off side as England edged towards parity.

With England accelerating towards the lead and India spinners Ojha and Ravichandran Ashwin often dropping too short, Cook and Prior made batting look so comfortable that it served to highlight the spineless nature of their first-innings capitulation.

It is that failure that ensures England still have much to do on day five if they are to pull off the most remarkable of escapes.