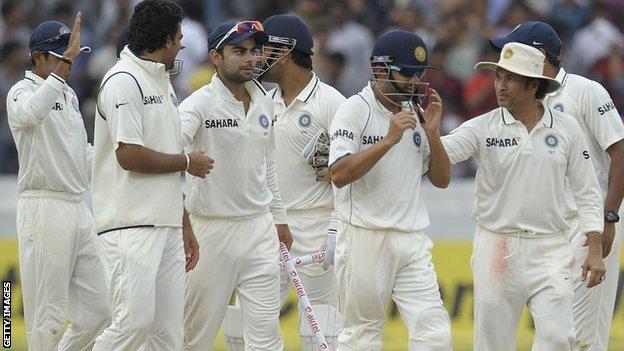 India dismissed any chance of a famous England escape by wrapping up a nine-wicket win on day five of the first Test in Ahmedabad.

Alastair Cook (176) and Matt Prior (91) kept England alive on day four, but when they both fell to Pragyan Ojha, the tourists were on the way to defeat.

England were bowled out for 406 before lunch as Ojha finished with 4-120.

Set 77 to win, India lost Virender Sehwag, but Cheteshwar Pujara took them to victory inside 16 overs.

"The best team won. India's batsmen applied themselves better and they've had two spinners who have bowled well, while their seamers also bowled better than ours. History shows they're a tough nut to crack in their own conditions."

Pujara, opening in place of the absent Gautam Gambhir, added 41 to his first-innings double century as he and Sehwag raced towards their modest target.

Sehwag was well held by Kevin Pietersen at long-on off Graeme Swann, leaving Virat Kohli to drive Swann down the ground and seal England's seventh loss in 12 Tests this year.

The home side fully deserved their lead in the four-match series, having had the better of all but two sessions in the match, while England must improve in all departments when the second Test in Mumbai begins on Friday.

The efforts of Cook and Prior, who shared a sixth-wicket stand of 157, just about kept England competitive after their first-innings collapse to 191 all out.

Between them, the captain and wicketkeeper scored 356 runs in the match, while the rest of England's frontline top seven - Pietersen, Nick Compton, Jonathan Trott, Ian Bell and Samit Patel - managed only 114.

The failure of the majority of England's top order had echoes of the 3-0 Test series defeat by Pakistan and the failed defence of the World Twenty20 in Sri Lanka, when they struggled to deal with high-quality spin on slow, Asian pitches.

The visitors can at least take heart from the way Cook and Prior dealt with India's slow bowlers in the second innings - Ravichandran Ashwin went 54 overs without taking a wicket - but 13 England wickets in the match fell to spin.

That fact seems to suggest that England's selection of only one frontline spinner in Swann was a mistake, while the pace trio of James Anderson, Tim Bresnan and Stuart Broad failed to find any of the reverse swing exploited by Indian pair Zaheer Khan and Umesh Yadav.

Cook's men can justifiably argue that their bowlers created chances - four catches were missed on a first day when India racked up 323-4 - but this highlights that fielding is another area that requires improvement.

One enforced change will be made, with Bell returning home for the birth of his child, while left-arm spinner Monty Panesar and pace bowler Steven Finn - if fully recovered from a thigh injury - could come into the reckoning.

Whatever tweaks England make to their attack, this match was lost by their first-innings batting.

Cook and Prior saved them from an innings defeat on the fourth day and needed to do the bulk of the work on day five if the tourists were to avoid defeat.

They survived the first half an hour, only for Prior to miss out on a deserved century when, playing back, he tamely patted a return catch to left-armer Ojha.

Cook had defied India for more than four sessions on his way to the highest score by an England batsman following on, but his resistance was broken four overs after Prior fell by one that turned and kept low.

England's demise was only a matter of time, especially with Broad offering a leading edge back to Yadav.

The counter-attacking Swann was bowled attempting to reverse-sweep Ashwin, before Bresnan drove Zaheer to cover.