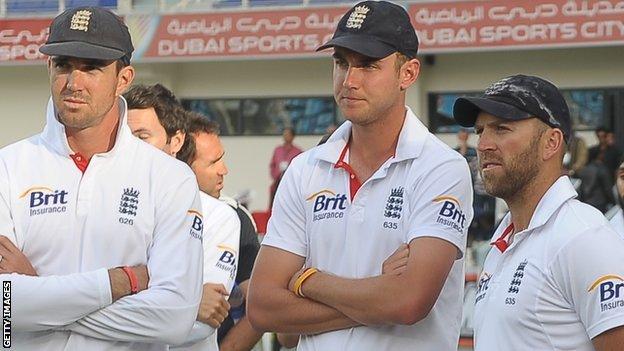 The defeat in the first Test in India is the latest part of what has not been a good year for the England team.

Since becoming the world's number one side in the summer of 2011, they have lost seven of their 12 Test matches, with their batting, bowling and fielding deteriorating.

Following the series defeat by South Africa that cost them top spot, then-captain Andrew Strauss said that England had preferred to be chasing the summit of the world rankings, rather than trying to defend it.

In six Tests in Asia this year, they have only made more than 200 runs in their first innings on two occasions and you will not win many Test matches with a record like that

That is something that goes with the territory. When you are at the top, teams raise their game to play against you, breathing down your neck because they want what you have.

England clearly never got to grips with that and since then they have not been getting enough runs, not bowling well enough and they have dropped too many catches.

It is a decline that began when they went to the UAE and lost 3-0 to Pakistan. That loss took them by surprise, denting their confidence at the same time.

Since then, they have had the Kevin Pietersen issue cast a shadow over what was ultimately a disappointing summer and they have fretted about playing spin, knowing that the trip to India was looming.

Despite all that, the scale of the defeat in Ahmedabad still comes as a surprise. Yes, England still had slim hopes of saving the match at the beginning of the fifth day, but it was actually a very one-sided contest.

To lose their final five wickets before lunch was disappointing, but always the most likely outcome.

Of course, much was made of the make-up of England's side, particularly the decision to leave out spinner Monty Panesar, and selection issues will again come under the spotlight in the run-up to the second Test in Mumbai, which begins on Friday.

For us outside the team, it's very easy to sit back and say the batsmen should score runs and the bowlers should take the wickets. It will be much more difficult than that for captain Alastair Cook.

For example, I have seen it suggested that Steven Finn, if fit, could come in for Stuart Broad. If Panesar also came into the side, that would push Graeme Swann up to number eight, having been number 10 in the first Test.

Can they really go into a Test match with such a long tail, especially when scoring runs in Asia has been England's biggest problem? When the ball turns in the subcontinent, the tail can be disposed of very quickly, as happened on the fifth morning in Ahmedabad.

In addition, any changes to the attack would only mask the bigger problem, which has been scoring runs.

One definite absentee from the next match will be Ian Bell, who is returning home for the birth of his child.

I've got nothing against any sportsman being there to see their children being born, but the fact that Bell has come out for one Test has rather backed England into a corner.

It's created a problem in that Bell had valuable practice time in the warm-up matches then played in the first Test, leaving England now having to turn to someone who won't have batted properly for 10 days or so.

For the batsmen that do play in Mumbai, they simply have to perform better than they did here. They should follow the example of Cook and Matt Prior, who proved that runs can be scored against the India spinners.

Ultimately, England have to up their game in every department if they are to have any chance of getting back in this series.