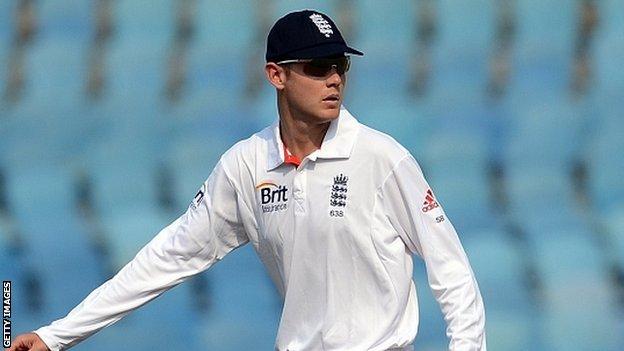 Sir Ian Botham has hit out at Stuart Broad after the England bowler reacted angrily to criticism of his form.

After England's defeat by India in the first Test, Broad tweeted: "Before you listen to too many ex-playing 'experts' being negative, ask them if they ever won a Test series in India...#28years."

Botham then sent a tweet to Broad, criticising his overseas performances.

He wrote: "Didn't average 40+ with the ball overseas! Not sure what I scored vs India with the bat? #justsaying"

He sat out the 1984-85 tour, when David Gower's men clinched England's last victory in the Asian nation.

The two sides of Stuart Broad

During his earlier post-match analysis for Sky Sports, Botham had left Broad out of his England team for the second Test, starting on Friday in Mumbai.

Broad failed to take a wicket in Ahmedabad and was dismissed for three on the final day as England crumbled to a nine-wicket defeat.

Botham called for England to make four changes for the second Test.

He wants to see Steven Finn, Monty Panesar, Eoin Morgan and Jonny Bairstow brought in for Broad, Tim Bresnan, Samit Patel and Ian Bell, who is flying home to attend the birth of his child.

Broad later tweeted to play down the row.

He wrote: "Spat with @BeefyBotham?? What spat? Love Beefy, best bowler England have ever had, then add his batting. Twitter is funny at times!"