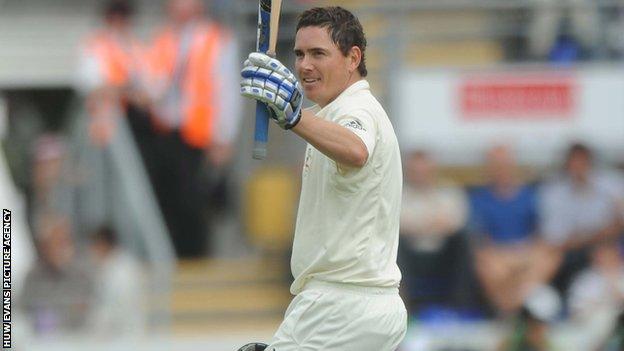 Marcus North has been confirmed as Glamorgan's one-day captain for 2013.

North will lead the Pro40 and T20 teams, roles shared by Jim Allenby and Mark Wallace in 2012.

Wallace will retain the captaincy of the four day team for the County Championship Division Two campaign.

"I'm honoured to be recognised by the management and to be given the chance to captain Glamorgan in limited-overs format," said North.

These two guys working together is a great fit, with Mark leading for four-day cricket and Marcus for the one-day role

The 33-year-old left-hander, who is an occasional off-spin bowler, was a regular in the Australian Test team for two years until December 2010, scoring nearly 1200 runs in 21 Tests.

"My one-day record is pretty good, having captained Western Australia on and off for eight years, I'm sure the extra responsibility will bring the best out of me as leader and player," added North."

Head of elite performance Matthew Mott said: "Both Marcus and Mark have wide ranging experience, so splitting the roles of captain between red and white ball cricket makes a lot of sense."

"These two guys working together is a great fit, with Mark leading for four-day cricket and Marcus for the one-day role.

"I would like to personally acknowledge 2012 player of the year Jim Allenby for his understanding during this change in leadership.

"Jim does have great leadership attributes and captaincy ambitions and he is a key player for Glamorgan going forward.

"However, Marcus has had a year with us so although it will be a transition for him, it's an opportunity to make a big change with our on-the-field resolve and ultimately perform better on the field.

"Marcus is a leader, with great cricket credentials and is passionate about making a difference at Glamorgan."

Glamorgan endured a difficult season in all competitions in 2012, finishing sixth in Division Two of the County Championship with only three wins in 16 matches.

Rain wrecked their T20 campaign with only five out of 10 fixtures completed, and three defeats meant they did not qualify for the knockout stages.

And the Welsh county managed just three wins in 12 fixtures in the 40 over tournament.