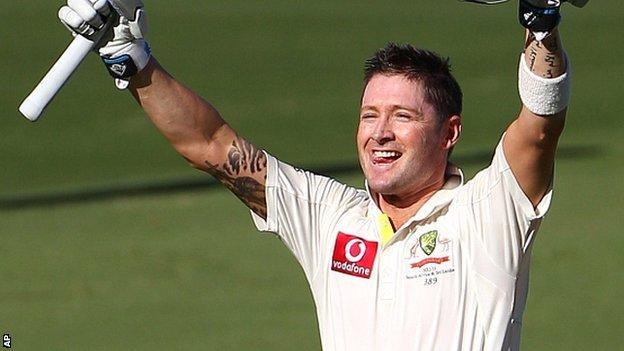 Australia captain Michael Clarke became the first man to score four Test double-hundreds in a calendar year as his side dominated South Africa on day one of the second Test in Adelaide.

Clarke, who scored 259 not out in the drawn first Test in Brisbane, finished the day unbeaten on 224 from 243 balls.

Clarke, who hit 39 fours and one six, shared partnerships of 155 with Warner and 272 with Hussey, who was dismissed by Dale Steyn with the last ball of the day.

Most runs in a calendar year

* Australia have three Tests remaining in 2012

Jacques Kallis took 2-19 as Australia were reduced to 55-3 before the all-rounder limped off with an injured right hamstring.

Kallis's exit in the 17th over saw the momentum swing dramatically back Australia's way, the 37-year-old having dismissed Ed Cowan (10) and Ricky Ponting (4) in 3.3 overs.

It also increased the pressure on the visitors' attack, Vernon Philander having been ruled out with a bad back hours before the match started.

Opener Warner hit 16 fours and four sixes in his third Test century, leg-spinner Imran Tahir, who finished the day with figures of 0-159 from 21 overs, proving the main victim.

After Warner was dismissed fending Morne Morkel to Graeme Smith at slip, Hussey joined Clarke and kept up the momentum.

The left-hander brought up his second consecutive Test hundred and 18th in all with a six off Tahir, one ball after Clarke had reached his 200.

It was the 31-year-old Clarke's 21st Test hundred in his 85th Test and Australia's second-highest first-day total in a Test match after the 496 scored against South Africa in Sydney in 1910.

In addition to his scores in the current series, Clarke scored 329 not out (Sydney) and 210 (Adelaide) against India in January.