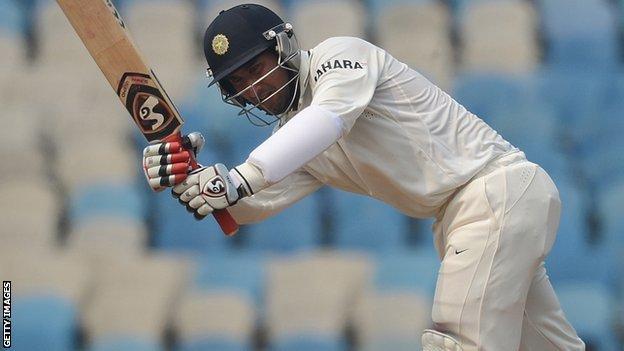 India's Cheteshwar Pujara again defied England with an elegant century on day one of the second Test in Mumbai.

Recalled England spinner Monty Panesar helped reduce the home side to 119-5 on the way to figures of 4-91.

But, on a wicket already turning, Pujara shared 97 with Ravichandran Ashwin to put India into what could prove to be a strong position.

"It is slightly India's day. England won the first and second sessions but India got away in the end. I am not sure how England will bat but Ashwin played unbelievably. It will be a low-scoring game. England's two spinners bowling well are as good as India have. Test matches are not won with just spinners; the batsman have to do well. If you don't bat well in the first innings, you are climbing a mountain."

The value of India's first-innings score will not be known until England bat on a used pitch that has shown early signs of deteriorating.

For all the extra potency Panesar gave to an attack that struggled in the nine-wicket defeat in the first Test, it was the first-innings failure to deal with spin that cost England in Ahmedabad, and the tourists must deal with even more slow bowling in Mumbai.

With pace bowler Umesh Yadav ruled out by a back injury, India called in Harbhajan Singh as his replacement, meaning England will be faced with three frontline spinners.

Before then, though, they must find a way to remove Pujara, who has now batted for 719 balls and more than 15 hours in the series for a total of 361 unbeaten runs.

"He's a good player and there were a couple of chances where we nearly had him so hopefully tomorrow morning we can get him early doors," Panesar told BBC Sport.

"We would have liked to have restrict them to under 250 but they have put in a good partnership. Hopefully tomorrow if we can keep them under 300, that will be really good for us."

Pujara arrived at the crease for the third delivery of the day after James Anderson swung one back to trap Gautam Gambhir lbw, an early boost for England after the disappointment of losing the toss.

"The tourists must wrap up the tail on day two, then bat as long as possible. If England have a bad day, the series will be gone. "

Pujara batted for the rest of the day, mixing classy accumulation with rock-solid defence. He did, however, need some luck on the way to a third Test hundred in his seventh Test.

A cut off Anderson fell just short of Nick Compton at point, while Anderson, who misjudged a chance off Pujara in the first innings of the opening Test, also failed to hold on to a sharp one-handed chance at gully off Panesar with the batsman on 60.

In between, time and again Pujara worked through the leg side for singles while occasionally unleashing drives of the highest class on both sides of the wicket.

Along with Ashwin, he manoeuvred India towards what may prove to be a match-winning total after Panesar made a mockery of the decision to omit him from the England XI for the first Test.

Perhaps nervous, the left-armer was wayward at first, but eventually found unerring accuracy to get through 34 overs in the day.

He bowled Virender Sehwag with some clever flight, then did for Sachin Tendulkar with a beauty that pitched on middle stump before hitting off.

Just as Virat Kohli was looking strong in partnership with Pujara, Panesar tempted him to drive to extra cover, with Graeme Swann getting one to straighten to remove Yuvraj Singh for a duck.

Statistics correct as of 23 November

Captain Mahendra Singh Dhoni was resolute in his support of Pujara, but when he was caught at gully by Swann off Panesar it looked like England had made the decisive breakthrough.

That was to discount Ashwin, the number eight who has a Test century to his name.

The right-hander dished out some particularly harsh treatment to the disappointing Stuart Broad, who had been ill before the Test and struggled with line and length to go at five runs per over.

England should take heart from the fact that a lower-order batsman was able to score so freely, and they will have a ball that is only 10 overs old when they return to try to run through the tail on day two.