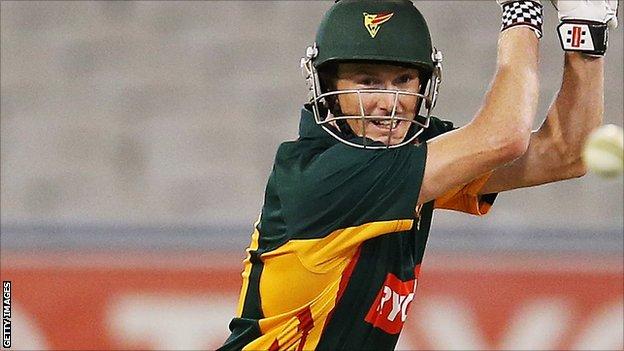 Hampshire have signed Australian Twenty20 captain George Bailey as their overseas player for the 2013 season.

The batsman made history earlier this year as the first player in more than a century to be named captain on his Australian international debut.

Bailey, 30, who will be available for all formats for Hants, will arrive in time for the season's start in April.

"I've heard a lot of good reports about Hampshire and am looking forward to playing there," said Bailey.

Bailey has scored 5,025 first-class runs for his home state of Tasmania at an average of 39.25.

He also has previous experience in English conditions having played for the Scottish Saltires in the Clydesdale Bank 40, scoring 90 against the Royals at The Rose Bowl in 2010.

In addition, he has also played Big Bash League cricket for the Melbourne Stars and Indian Premier League for the Chennai Super Kings.

"George is someone we have always recognised as a good player," Hampshire manager Giles White told BBC Radio Solent.

"He has strong leadership skills and is a fine batsman so we are excited about the signing.

"He's an attacking batsman, a middle-order player and has a proven record.

"He is hungry to do do well and sees it as a good challenge. He is 30 and will complement our other senior players and will add to the changing room as well as the pitch."

Meanwhile, Hampshire have also confirmed batsman Neil McKenzie has committed himself to the club for a fourth successive season in 2013, having signed a one-year deal.

But Bilal Shafayat, who played for Hampshire on a one-year deal in 2012, has not been retained for the 2013 season.