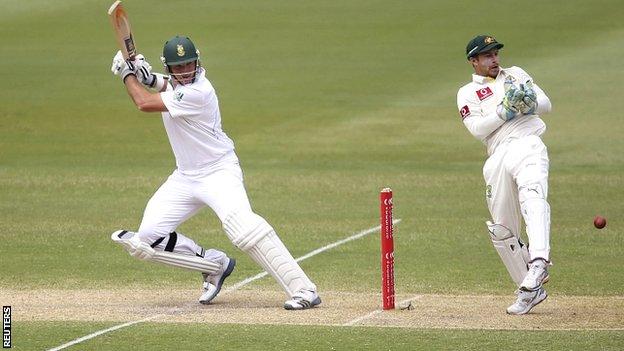 Captain Graeme Smith made an unbeaten 111 as South Africa closed day two of the second Test in Adelaide 333 runs behind Australia on 217-2.

Australia resumed on 482-5 but lost record-breaking skipper Michael Clarke in the fifth over of the day, having added six to his overnight 224.

Three wickets fell in four overs as the home side were bowled out for 550.

The tourists lost the prolific Hashim Amla for 11 but Smith remained to complete his 26th Test hundred.

On Thursday Clarke became the first man to score four double centuries in a calendar year as Australia built a commanding platform.

But their hopes of taking a lead into the final Test in Perth following a drawn opening match in Brisbane receded as fast bowler Morne Morkel, hit for five fours in an over by Clarke on day one, claimed his first five-wicket haul on Australian soil.

After his unbeaten 259 at the Waca, Clarke was out for the first time in the series when Morkel angled one in to beat his defence and hit the middle stump.

Morkel's hostility continued to unsettle the batsman and seamer Rory Kleinveldt collected his first Test wicket as the hosts were reduced to 504-9 before James Pattinson launched spinner Imran Tahir for two sixes and hit two fours in three balls off paceman Dale Steyn.

Pattinson made 42, his highest Test score, before he was caught at the second attempt by Smith at slip, the skipper's fourth catch of the innings.

Smith and opening partner Alviro Petersen survived three overs before lunch, the captain still on nought after 13 balls, but after the resumption Smith quickly hit three fours in four balls from Pattinson.

Clarke should have dismissed his counterpart when Smith had made 44 but with the left-hander yards out of his crease, wicktkeeper Matthew Wade fumbled the stumping opportunity.

The flat surface offered little assistance for the bowlers and it was a run-out that provided the next wicket, Petersen too casual in his pursuit of a run, and almost colliding mid-pitch with Smith as Mike Hussey threw down the stumps at the bowler's end from mid-on.

Smith was reprieved again on 78 when he was given out caught behind off Pattinson, but the review failed to detect any edge, to the dismay of the crowd.

However, they were able to celebrate the wicket of Amla, Wade again failing to collect the ball cleanly off part-time spinner David Warner but with time to take the bails off at the second attempt.

With South Africa's premier all-rounder Jacques Kallis not permitted to bat until 92 overs have passed or five wickets have fallen after spending time off the field because of a hamstring injury sustained on the opening day, Jacques Rudolph came in at number four and helped Smith guide the tourists to stumps with no further loss.