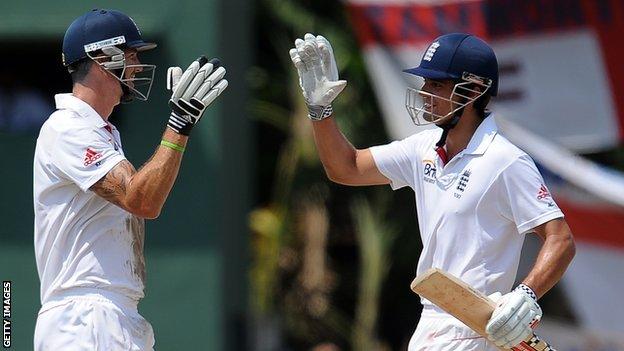 Alastair Cook and Kevin Pietersen overcame a trial by spin in an unbroken stand of 110 as England reached 178-2 in reply to India's 327 in Mumbai.

But captain Cook batted with supreme calm to reach 87 at stumps on day two, while Pietersen served up a reminder of his talent with 62 off 85 balls.

After a nine-wicket defeat in the first Test last week, it is to England's great credit that they find themselves in a strong position after two days of tense Test cricket on a dry, dusty surface.

Panesar and Swann outbowled India's trio of spinners as they wrapped up the last four wickets with minimal fuss on the second morning.

"You really thought they might be in for a torrid afternoon on such a dry, dusty pitch, but that wasn't the case at all. Cook picked up from where he left off in the first Test, but the big transformation was Pietersen, who played in a manner totally unrecognisable from his panicky and frenetic performance in Ahmedabad."

And, after Compton had shown good technique to help lay a foundation for the England reply, Cook and Pietersen passed their examination against the turning ball with flying colours.

It was the innings Pietersen so badly needed to reaffirm his importance to the England team in the wake of the furore over his dropping from the side for sending text messages to opposition players and his frenetic performance in Ahmedabad.

Coming to the crease with England in peril after the fall of two wickets in successive Pragyan Ojha overs, he drove his first ball through cover for four.

There was the odd scare - one edge fell just short of first slip and a mistimed drive narrowly avoided midwicket - but Pietersen remained largely in control as he mixed solid defence with his trademark array of attacking strokes to reach his 28th Test fifty.

Cook, meanwhile, is within 13 runs of his fourth hundred in as many Tests as England skipper after another measured innings.

A century for either player would be their 22nd in Tests, equalling the England record held by Geoffrey Boycott, Colin Cowdrey and Walter Hammond.

The England captain, whose brilliant second-innings 176 in Ahmedabad was in vain, once again proved himself a fine judge of length on turning pitches as he scored heavily square of the wicket on both sides.

His first task was to survive a tricky 10-minute period before lunch after India chose to open the bowling with two spinners in the first innings, a move not seen in Tests since 1910.

Alastair Cook has scored a century in each of his three Tests as England captain and is closing in on a fourth:

The composed Compton faced 90 balls for his 29, sharing an opening stand of 66 with Cook before pushing forward to Ojha and edging to Virender Sehwag at first slip.

With men crowded round the bat, Trott's travails continued as he played back to a ball that straightened and was struck in front of middle stump.

However, thanks to the efforts of Cook and Pietersen, the tourists will go into day three in confident mood.

Earlier, England did an efficient job of wrapping up India's last four wickets for 61 runs after they resumed on 266-6.

Panesar rapped Ravichandran Ashwin on the back pad with a quicker, flatter off-spinner to break a seventh-wicket partnership of 111 and complete his five-wicket haul.

Harbhajan Singh slapped a quick 21 before he too was leg before to Swann, who then had Cheteshwar Pujara smartly stumped by Matt Prior for 135 - the first time he had been dismissed in the series, off the 790th ball he faced.

Zaheer Khan clobbered a six and a four off Panesar before he was caught at short leg by Jonny Bairstow to give Swann his third wicket in 10 balls.