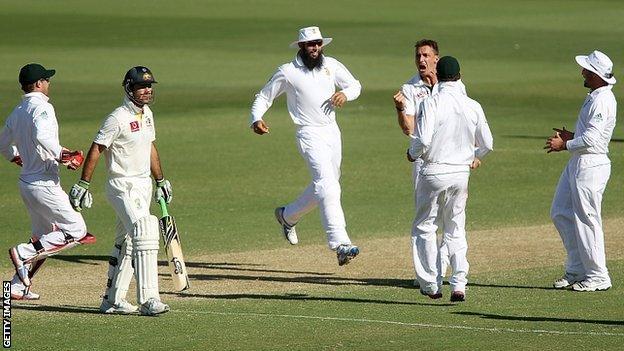 A flurry of late Australia wickets on day three revived South Africa's hopes of winning the second Test in Adelaide.

With a first innings lead of 162 after bowling South Africa out for 388, Australia were cruising on 77-0.

But seamer Rory Kleinveldt took three wickets as the hosts slipped to 111-5 at stumps, a lead of 273.

South Africa were rescued from 250-7 by a 93-run stand between Faf du Plessis (78) and Jacques Kallis, who batted through a hamstring injury to make 58.

The tourists had begun the day on 217-2 but Jacques Rudolph (29) was caught at cover by Rob Quiney, after advancing the total to 233, to spark a collapse of five wickets for just 17 runs.

Captain Graeme Smith was next to go, feathering a Peter Siddle delivery to wicketkeeper Matthew Wade. Smith, who had scored 122, asked for a review and although Hot Spot confirmed a feint edge, he was visibly disgruntled with the decision.

AB de Villiers wasted the second review before departing leg before wicket to Siddle for one, while Ben Hilfenhaus had Dale Steyn (1) caught by Ricky Ponting and clean bowled Rory Kleinveldt to leave the visitors on 250-7.

However, Kallis, who had limped off the field with a hamstring strain on the first day, steadied the innings alongside Test debutant Du Plessis.

After lunch, and with his footwork hampered by his injury, Kallis began to swing the bat and clubbed Siddle for three successive boundaries in one over and three more in another. He then smashed a four and six off Michael Clarke, as 46 of his 58 runs came in boundaries, before edging one to Wade.

Du Plessis drove Siddle for a six over long on but when Morne Morkel was bowled by Nathan Lyon for six, he soon followed for 78, caught by Clarke off Hilfenhaus (3-49).

Australia quickly set about building on their first-innings lead of 162 but the first-wicket partnership of Ed Cowan and David Warner was ended when the latter was caught by Du Plessis at cover off the bowling of right-arm seamer Kleinveldt.

And 77-1 became 77-2 as debutant Quiney, who faced just eight balls in the first innings, edged Kleinveldt to De Villiers to depart for a second-ball duck and complete his pair.

Cowan (29) was next to go, bowled between bat and pad by Kleinveldt, who finished the day with 3-14 from six overs.

Steyn reduced Australia to 98-4 by bowling Ponting (16) while night-watchman Siddle (1) failed to do his job, lasting 16 balls before edging Mokel to De Villiers.

However, South Africa still have work to do with in-form duo Clarke (9no) and Mike Hussey (5no) at the crease. Clarke hit 230 and Hussey 103 in the first innings as they shared a fifth-wicket partnership of 262.

The first Test of the three-match series was drawn.