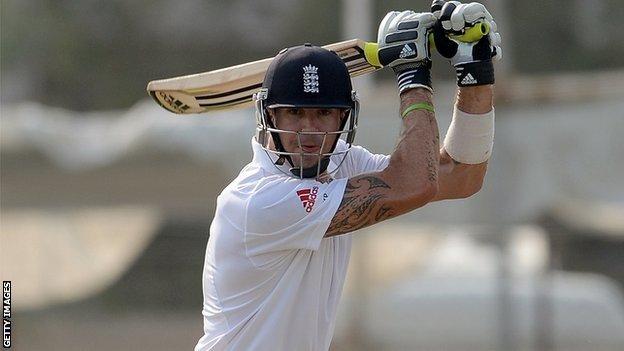 England surpassed expectations with their performance on in Mumbai.

It was impossible not to fear the worst for their batsman after seeing the way the pitch was behaving during India's innings and knowing the way England have struggled against the turning ball in subcontinental conditions this year.

You really thought they might be in for a torrid afternoon on such a dry, dusty pitch but that wasn't the case at all.

In fact, India spinners Ravichandran Ashwin, Pragyan Ojha and Harbhajan Singh did not produce nearly as many wicket-taking deliveries as England duo Monty Panesar and Graeme Swann, who extracted dramatic turn and bounce as they wrapped up the last four India wickets in the morning session.

It was nonetheless a huge challenge for Alastair Cook and Kevin Pietersen to build a partnership of substance on an unpredictable wicket and one they rose to with great skill.

"Pietersen has not been crash, bang, wallop. This was lovely, controlled, professional batting from one of the best batsmen in the world. The reason he has played so well is, instead of playing to the leg side against the spin, he played everything to mid-off and extra-cover. His ego didn't get in the way. It's been chalk and cheese from Ahmedabad to here."

Cook picked up from where he left off in Ahmedabad with an incredibly assured innings, betraying the confidence he is feeling at present by crashing Ojha for a rare six.

But the big transformation was Pietersen, who played in a manner totally unrecognisable from his panicky and frenetic performance in the first Test.

He looked calm, assured and positive and used his feet very well as he compiled his 28th Test fifty.

Left-arm spin clearly is an issue for him, especially at the start of an innings, but he worked his way through it today, playing exactly the way people have suggested he should.

You can't just go out there and bat the same way in all conditions - the best players adjust and that is what Pietersen did today.

He wasn't looking to hit the spinner through mid-wicket - a shot where the risk outweighs the reward - he played a very disciplined and controlled innings but still managed to score quickly.

Pietersen came to the crease after England had lost Nick Compton and Jonathan Trott in quick succession following an opening partnership of 66 between Compton and Cook.

Somerset's Compton is proving an excellent choice for this tour. He is hard to get out, leaves the ball well and enjoys occupying the crease. He sells his wicket dearly and that is exactly the attitude you have to have over here in these conditions.

Compton was out to a ball that was almost impossible not to nick and there is no doubt that you need a bit of luck to bat successfully in these conditions.

England will be wary of the fact that they have to bat last on this pitch, but between them, Cook and Pietersen have given them a real chance of performing strongly in this game.