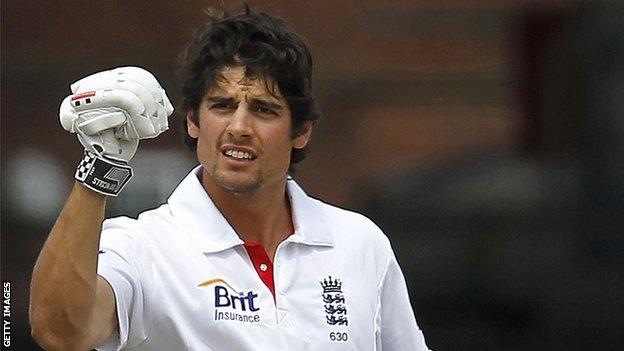 England ruthlessly completed a memorable 10-wicket victory over India in the second Test in Mumbai to level the four-match series.

"After watching England so ruthlessly tear up the script, India will be asking themselves several serious questions about how they managed to lose that Test match"

Monty Panesar and Graeme Swann shared the last three India second-innings wickets in 45 minutes on the fourth morning to bowl the hosts out for 142.

England openers Alastair Cook and Nick Compton then knocked off a target of 57 with ease before lunch.

It is only England's second Test win in India in 14 matches since 1985.

England's spectacular all-round performance was the perfect antidote to their meek showing in the first Test and ignites the series with two matches to play.

The recalled Panesar made a mockery of the decision to leave him out in Ahmedabad with a Test-best 11 wickets in the match as 19 of the 20 India wickets fell to spin, while Cook and Kevin Pietersen scored brilliant hundreds to secure a crucial first-innings lead of 86.

Man of the match Pietersen's assault on the India bowling on his way to 186 on Sunday afternoon was particularly important, demoralising the hosts and filling England with confidence.

Panesar and Swann, who outbowled India's three spinners throughout, followed up with seven wickets on the third evening to ensure it was always likely to be a matter of when, rather than if, England would finish the job on Monday.

Leading by 31 with only three wickets in hand, India took 10 off the first over of the day but Harbhajan Singh fell in the next when he gloved Swann to Jonathan Trott at slip.

Zaheer Khan top-edged a slog-sweep and was easily taken by Matt Prior to give Panesar figures of 6-81, before opener Gautam Gambhir was trapped lbw for 65 by Swann, who finished with 4-43 - and 8-113 in the match.

"The match was a wonderful advert for Test cricket. It had so many good things in it: superb batting, different styles and wonderful bowling by the two England spinners, who proved they are better than India's. A terrific Test match."

Fears of a scenario reminiscent of Abu Dhabi in January when England collapsed to 72 all out chasing a modest 145 to beat Pakistan were quickly dispelled as Cook and Compton set about their task with relish.

Compton, playing his second Test, cracked four fours and a six in making 30 not out from 28 balls and Cook posted an unbeaten 18 as the tourists cantered home.

England's first win in six Tests leaves the series tantalisingly poised going into the third match in Kolkata starting on 5 December, with the finale in Nagpur to follow.

England have not won a series in India since David Gower's side came from behind to seal a 2-1 triumph in 1985.