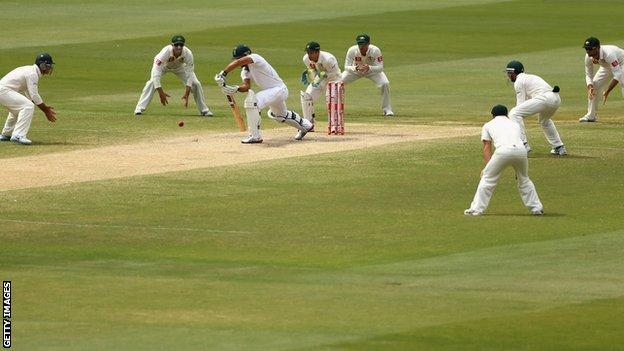 Debutant Faf Du Plessis defied Australia with a marathon century to earn South Africa a remarkable draw in the second Test in Adelaide.

He faced 376 balls for his 110 not out as Australia took four of the six wickets needed for a 1-0 series lead.

AB de Villiers ate up 220 deliveries for his 33, while Jacques Kallis made 46 despite a hamstring injury.

"It was awesome to be a part of it. There were so many emotions going through me," said man of the match Du Plessis, who made 78 in the first innings.

"Myself, AB and Jacques took it very deep, then the tail came in and showed a lot of character."

Du Plessis was dropped on 94 by wicketkeeper Matthew Wade, stood up to Ben Hilfenhaus, in the last over before tea and survived two lbw appeals on review.

He added 78 for the sixth wicket in almost 40 overs with Kallis, who saw Nathan Lyon spill a return catch when he had made six.

The decisive final Test of the series at the Waca in Perth starts on Friday, which Australia must win to usurp South Africa at the top of the International Cricket Council Test rankings.

Australia have named a 14-man squad for the match, bringing in Shane Watson in place of Rob Quiney and Mitchell Johnson to replace the injured James Pattinson.