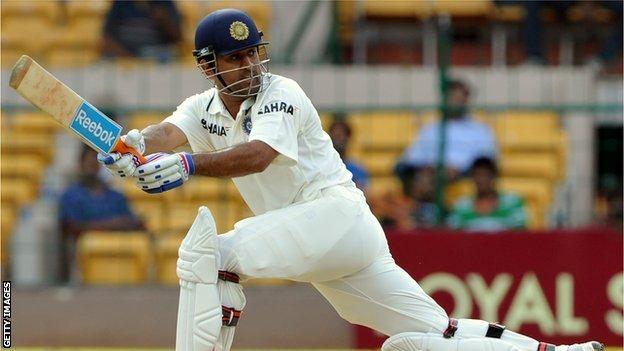 Newspapers, websites and TV channels which revelled in the victory of the first Test saw their spirits dampened by the "embarrassing defeat".

Criticism of Dhoni's preference for spinning tracks was widespread, as was speculation over batsman Sachin Tendulkar's future.

PTI news agency said "India's ploy to prepare a spinning track backfired heavily" as England's discipline made them a superior side.

The agency described India's performance as "a pathetic display" and conceded that the English thoroughly beat the hosts on their home turf.

Popular cricket website Cricketnext.com said Dhoni now has "a lot of rethinking to do" as his strategy appears to have failed.

The Indian Express also directed criticism at the Indian captain, saying he "hyped up" his batsmen and spinners on turning tracks, but the result showed that his enthusiasm was misplaced.

The paper said Dhoni was too busy measuring up his own resources and "failed to check" the English batting and spinning web of Monty Panesar and Graeme Swann, resulting in an "embarrassing defeat."

The Deccan Chronicle blamed spinners Harbhajan Singh and Ravichandran Ashwin for failing to exploit the track. Ashwin in particular "could not stick to a consistent line and struggled to be penetrative despite bowling 42 overs in the first innings," the paper said.

While the media and pundits blamed the whole team for failing to perform against England, veteran batsman Sachin Tendulkar's poor form once again drew flak and fuelled debate on his possible retirement.

In an opinion poll conducted by the Deccan Chronicle, 82% of online readers said it was time for the star batsman to bow out.

However, the batsman received support from the Board of Cricket Control in India (BCCI).

"He will hang up his boots when he thinks it's time for him to go. He does not need any advice on this. Before making a comment on his performance you have to see his colossal record and his past performance," BCCI official Rajiv Shukla said.

The Indian media showed no reluctance in praising England for their impressive show.

The Deccan Chronicle said England played this Test with a "tremendous amount of self-belief," and praised the visitors for responding positively to their defeat in Ahmedabad.

The next Test will begin on 5 December in Kolkata.