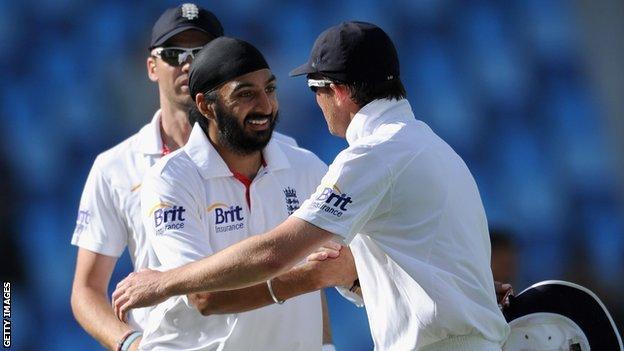 England's victory over India in Mumbai was one of the most unexpected Test wins I have seen in all my years of playing and watching cricket.

When you take into account England's record against spin bowling this year, the heavy defeat in Ahmedabad, the absence of one of their leading batsmen in Ian Bell and the fact that they lost the toss on a pitch specifically prepared to put them at a disadvantage, it really was a remarkable triumph.

After watching England so ruthlessly tear up the script, India will be asking themselves several serious questions about how they managed to lose that Test match.

"The match was a wonderful advert for Test cricket. It had so many good things in it: superb batting, different styles and wonderful bowling by the two England spinners, who proved they are better than India's. A terrific Test match."

The main answer is that they were outbowled by England's spinners.

I said to Andy Flower when we first got to Mumbai that England's spinners are better than India's and I think they proved that here.

Monty Panesar thrives in conditions where the ball spins and bounces at pace and he was able to exploit a pitch that was tailor-made for his style of bowling, whereas India's spinners couldn't get that pace right at all.

Equally fundamental were the contributions of Kevin Pietersen and captain Alastair Cook, who batted in exactly the right way in these conditions to put England in a commanding position.

The transformation in Pietersen from Ahmedabad was so dramatic that I wonder whether he may have had a little chat with Shane Warne.

Warne, who was in Mumbai working for Indian TV, knows Pietersen's game inside out so it wouldn't surprise me if he had given Kevin a bit of advice on how to approach things.

Pietersen's brilliant innings infused England with a confidence that spilt over into the way they approached their second innings run chase.

I was particularly pleased with the way Nick Compton seized the initiative with 30 from 28 balls to drive England over the line with a flourish.

He could have sat back and played second fiddle to Cook but he made his mark and gave a little glimpse as to what he has to offer.

India captain Mahendra Singh Dhoni has said he is going to continue to prepare turning tracks and I do not think England will mind that in the slightest.

They would rather play on a pitch likely to produce a result because they know their spinners have every chance of outbowling their counterparts again and it will then come down to their batsmen once again following the example of Cook and Pietersen.

Jonathan Trott will want to get some runs to end his poor run of form, while it will be interesting to see if Bell gets straight back into the side.

Having missed the second Test on paternity leave, I think he will have to arrive by Saturday if he is to stand any chance of playing in the third Test starting the following Wednesday.

Stuart Broad's hopes of playing will depend on his health and whether Steven Finn can prove his fitness between the Tests.

I don't think England would select Tim Bresnan ahead of Broad in a two-man attack because Broad has that extra height and ability to hit the pitch a bit harder, but he needs to shrug off his fever, do some hard work in the nets and get his pace up a little bit.

And so we head to the famous Eden Gardens in Kolkata with the series mouth-wateringly poised.

Interest in Test cricket over here has dwindled in recent years with the popularity of 50-over cricket and the rise of Twenty20.

Let's just hope this series can reignite that interest because once again Test cricket has shown that it has no peer.