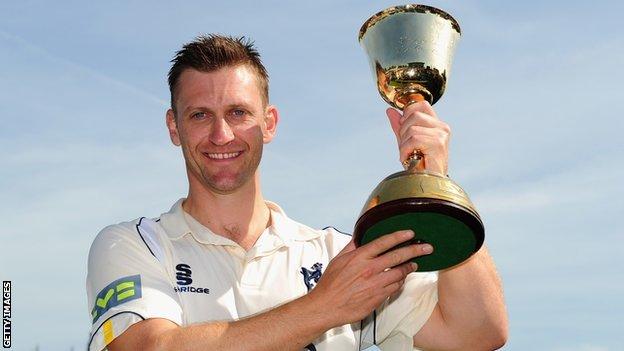 Warwickshire will begin the defence of their County Championship title with a home game against promoted Derbyshire.

The Championship gets under way on 10 April but will finish almost two weeks later than 2012, with the final round of games starting on 24 September.

The season actually begins on 24 March when Warwickshire meet an MCC XI in Abu Dhabi in the four-day curtain-raiser.

The final CB40 competition will start on 3 May with holders Hampshire away at Essex and the FLt20 on 26 June.

Opening round of County Championship fixtures

Next summer will be the last before changes to the structure for limited overs cricket come into force.

From 2014, the CB40 will be replaced by a 50-over competition to mirror international cricket and teams will play 14 T20 group games instead of the current 10.

However, there will be no changes to the County Championship format, which will continue to feature two groups of nine.

The 10 April start-date for the Championship next season is five days later than in 2012.

And after taking on Derbyshire, whose team will include ex-Warwickshire wicketkeeper Richard Johnson, the defending champions - who have yet to confirm their overseas player for the start of the season - will again be at home in the second round of matches when they welcome Durham to Edgbaston a week later.

By contrast, last summer's runners-up Somerset will be on the road as they begin their campaign against Durham at Chester-le-Street on 10 April and then head south to take on Surrey, who have significantly revamped their squad by bringing in South Africa Test star Graeme Smith as captain, former Worcestershire skipper Vikram Solanki and Lancashire spinner Gary Keedy.

Lancashire and Worcestershire, the two sides relegated last summer, will go head to head at Old Trafford in the opening round of matches as they look to make an immediate return from Division Two.

Once again, there will be no Roses match in the Championship after Yorkshire were promoted and Lancashire - the 2011 champions - went down.

However, the two teams will meet twice in less than three weeks in the FL t20, with Yorkshire, who have increased their seam bowling options by signing Jack Brooks and Liam Plunkett, enjoying home advantage on 5 July and Old Trafford staging the North group re-match on 24 July.

The FL t20 quarter-finals will take place from 6-8 August, with finals day at Edgbaston for a fifth time on 17 August, eight days earlier than last summer.

The groups remain unchanged for the game's shortest format, but not so in the CB40, with the 21 teams - also including Scotland, Unicorns and the Netherlands - given a shake-up.

The final at Lord's takes place on 21 September and, in a change to 2012, will come before the final round of Championship fixtures, which will include the return match between Derbyshire and Warwickshire at derby.