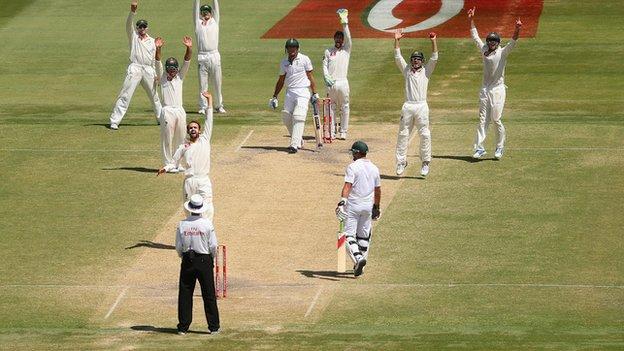 The riveting Test matches which have just taken place in Mumbai and Adelaide showed exactly why Test cricket is still the very best form of the game.

I tweeted that sentiment on Monday morning and was very pleased to see from the responses how many people agree with me in spite of the rise and rise of Twenty20.

When I was a player, Test cricket was always seen as the pinnacle of your career and that is the way it should always be.

Stewie on the Rolling Stones

"I was lucky enough to go to the Rolling Stones' 50th anniversary concert at the O2 Arena on Sunday night and it was the best live show I have ever seen. In any sphere, you judge people on how long they can stay at the top and Mick Jagger and his team have shown what it means to be great. Living legends."

There is definitely a place for 50-over and Twenty20 cricket in the game, but Test matches are where you really determine who are the very best players and which are the best teams.

Test matches are tactical battles that develop over a period of time and then suddenly accelerate out of nowhere. When this happens it provides a spectacle that can have you on the edge of your seat for hours.

In Mumbai, we had Kevin Pietersen's sensational innings as he catapulted England from a solid foundation to a commanding lead.

That was followed by the drama of two spinners working in tandem on a turning pitch with fielders crowded around the bat and the feeling that a wicket could fall with every ball.

Meanwhile, over in Adelaide we saw South Africa seemingly doomed to a defeat after Michael Clarke's double hundred, only for debutant Faf du Plessis to salvage a draw with an incredible rearguard innings on the final day.

Test match cricket tends to provide the sport's most unforgettable contests because it carries a level of tension that the shorter forms of the game struggle to replicate.

I ask you, as cricket fans, how many of you can honestly remember six top-class one-day internationals? Alternatively, if I ask you to recall the scores in all three series between England and South Africa last summer (without using search engines please!) in the differing formats which one do you remember first?

Despite their potential to provide thrilling sporting drama, not nearly enough Test matches around the world are selling out and I think the governing bodies need to work harder on the marketing and promoting of the five-day game.

"Rafael Benitez certainly would not have been my choice as Chelsea manager but I am a fan of the club and will support them whoever is in charge. The owner puts the money in and reserves the right to hire and fire as he pleases but fans are also entitled to express their opinion and I think the majority made their feelings about Benitez very clear at the Manchester City game on Sunday."

When I turn up in a city on the day before a Test match, whether in England or elsewhere in the world, I very rarely see a billboard, poster or sign flagging up the fact that Test cricket is going to be staged in that city. When I turn on the television, I never see an advert promoting ticket sales for an upcoming Test match.

I also believe that the condition of the pitch is fundamental to the attraction of Test cricket. I don't want to see a game played on a batsman's paradise where you know after the first day that it is going to be a high scoring yet dull draw.

As the match in Mumbai has shown, if a pitch has enough in it for the bowlers, the quality and excitement levels are much higher.

You can't ever guarantee people are going to walk through the turnstiles, but if you prepare a surface that is going to produce a positive result then you have a much better chance of a tough-fought contest which the public like to see.

The biggest challenge for the sport's administrators is to find the right balance between the three forms of the game and avoid overkill.

These days there are so many matches being staged that they are losing context and ceasing to be viewed as big events by the cricket-watching public and sometimes by the players too.

If we want to enthuse people, we need to make sure that every international match regardless of the format is deemed to be a huge occasion. When it comes to cricket, it should be about quality, not quantity. Sometimes less can mean more.