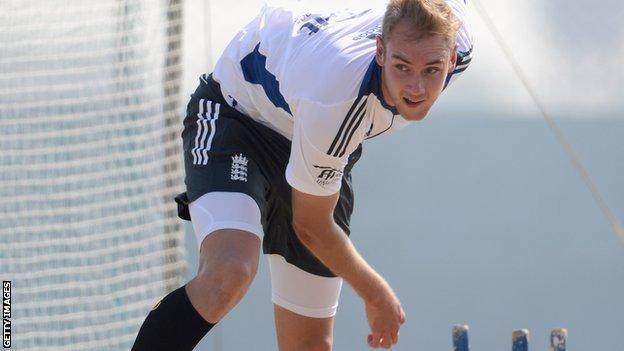 England bowling coach David Saker says the form of fast bowler Stuart Broad in the first two Tests against India is a cause for "concern".

Broad has not taken a wicket and could be replaced in next week's third Test by Steven Finn, who took 4-60 on his return from injury in a tour match.

Saker told BBC Sport: "There's concern from Stuart's point of view and ours.

"Nothing gets caught at slip in India, so don't pick a seam bowler that's looking to get outside edges. Just bowl straight. England made the mistake in the first Test of bowling with width and Virender Sehwag smashed them through the off side. Cramp the Indians for room, look to hit the stumps and gets lbws. It might be suited to someone like Graham Onions, who bowls wicket to wicket."

"We're hoping [Finn] gets through. He's probably the bowler we need over here because he has the extra pace."

With 40 victims, Broad has taken more Test wickets than any other pace bowler in the world in 2012.

But the Nottinghamshire man has struggled of late, with only 14 wickets at an average of 52.35 in his last six Tests.

Vice-captain Broad was ill in the run-up to the second Test against India and bowled only 12 overs in the match as England earned a 10-wicket win to level the series 1-1.

"We expect if you only play two seamers that they have some influence in the game," added Saker.

"We need them to do the job they've been asked to do and Stuart probably hasn't done that as yet. He was sick, but I don't think we can blame his performance on that.

"He bowled some decent overs but, on the whole, wasn't up to his standard. We have to deal with that and make sure he's better the next time he plays."

Broad's fellow England fast bowler James Anderson told BBC Radio 5 live that he was certain his vice-captain would get back to his best.

"As players, we do go through bad bits of form and he's been through that in the past couple of games," he said. "But he's a strong enough character, I'm sure he'll bounce back."

Finn was ruled out of the first two Tests after injuring his thigh during England's first warm-up match on 30 October.

The Middlesex seamer returned to action for the England Performance Programme side in a three-day game against the DY Patil Academy in Mumbai, claiming four wickets in 16 overs on Tuesday's first day.

Finn, who bowled four spells of four overs each on a quick pitch, tweeted: "Good to be back on the park today. 16 overs is gonna hurt in the morning though. Stretcher for me tomorrow."

Saker had earlier said: "If Finn gets through 20 overs in those three days he'll definitely come into calculation for that second seamer's spot.

"He bowled really well in the one-day series over here and has troubled the Indians when he's played against them. We hope to get him in."