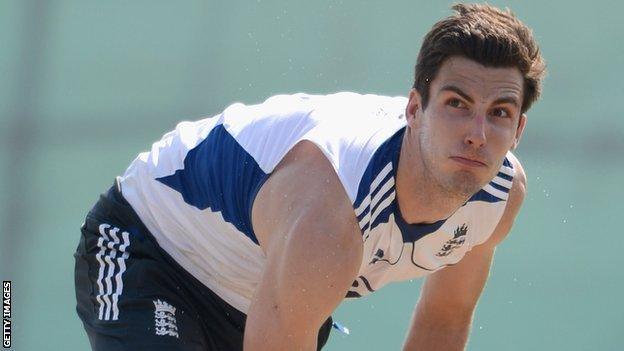 England fast bowler Steven Finn proved his fitness ahead of the third Test against India in Kolkata as the Performance Programme beat a DY Patil Academy XI by an innings and 193 runs.

Leg-spinner Scott Borthwick took six wickets on the final day as the hosts were bowled out for just 87.

Finn, who took 4-50 in the first innings, bowled seven wicketless overs on the final day.

The 23-year-old missed the first two Tests with a thigh injury.

Surrey seam bowler Stuart Meaker took 3-8 in the DY Patil Academy XI second innings in Mumbai, but accepts that Finn, who has taken 66 wickets in 16 Tests, is more likely to feature in the third Test at Eden Gardens, which starts on 5 December.

"I wouldn't be surprised if we saw him (in the third Test). He bowled brilliantly, hit the mark straight away and got four wickets. He was a bit unlucky he didn't get a few today."

Meaker joined the England squad as cover for Middlesex's Finn at the start of November, and would have made his debut in the second Test in Mumbai if Stuart Broad had failed to recover from illness. England won that game to draw level in the four-match series.

"I got pretty close," he acknowledged. "If Stuart Broad hadn't pulled through it could have been an exciting time for me. I very nearly could have made a debut after just being called up as cover."

The South Africa-born bowler admits Finn's apparent return to fitness does not help his own chances of playing in Kolkata.

"Personally, it is not great to see him back for my own reasons! If he is not fit, I'd love to put my own name in the hat," he said.

"There are a lots of good bowlers ahead of me, so I just have to wait and be patient."