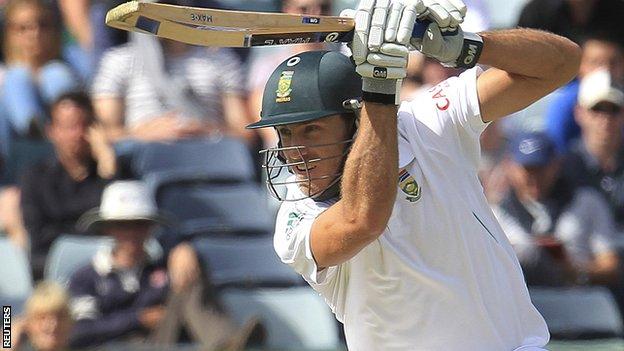 South Africa were once again indebted to new boy Faf du Plessis as they fought back on day one of the third and final Test against hosts Australia.

Du Plessis, who was man of the match in the second Test on his debut, scored an unbeaten 78 to lift South Africa to 225 all out in Perth.

The visitors had slumped to 75-6 after winning the toss.

And there was some consolation for the Proteas late in the day as they reduced Australia to 33-2 at the close.

Du Plessis, 28, scored 78 in his first Test knock last week and added an unbeaten 110 in the second innings, batting through the day to save the second Test and ensure the two sides went into the decider level at 0-0.

He shared partnerships of 57 with Robin Peterson (31) and 64 with Vernon Philander (28) to lift South Africa out of serious trouble as Australia's new-look pace attack prospered at the Waca.

The hosts fielded a totally changed pace battery from the second Test because of injury, with Mitchell Johnson recalled for his first Test in a year, Mitchell Starc promoted from 12th man and John Hastings handed his Test debut.

All three were among the wickets, but it was Shane Watson - freshly returned from a calf injury after missing his last eight home Tests - who made the breakthrough as South Africa captain Graeme Smith was caught at first slip for 16.

Starc excelled and removed opener Petersen for a steadily paced 30 with a fierce, full delivery before finding a way through the defence of Jacques Kallis, who has a hamstring problem, after the veteran all-rounder had scored two runs from seven painful-looking balls.

After lunch Hashim Amla was run out for 11 and AB de Villiers became Hastings' first Test victim, and it took some big hitting from Philander to assist Du Plessis in lifting them past 200.

Australia lost opener Ed Cowan for a golden duck as Dale Steyn struck in the first over of their reply and were 33-2 at stumps.

The hosts must win the game, which is Ricky Ponting's final outing in international cricket, to usurp South Africa at the top of the International Cricket Council Test rankings.