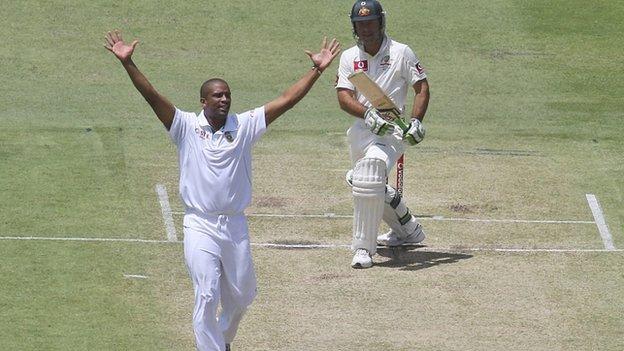 Ricky Ponting lasted just 10 minutes at the crease in his final Test match as ruthless South Africa claimed the upper hand over Australia in the third Test.

Hashim Amla is a run away from making his 18th Test ton, while captain Graeme Smith scored 84 from 100 balls.

Earlier, Dale Steyn was the pick of the bowlers, taking 4-40 from 16 overs.

Amla and Smith embarrassed the Aussie bowling attack on a Waca pitch that had seen 21 wickets fall by the second over of the sixth session.

South Africa were scoring at more than six runs an over against a set of bowlers seemingly devoid of ideas, with the usually patient Amla finishing the day on 99 from just 84 balls.

Australia began the day on 33-2, but that soon became 45-6 following a remarkable spell of bowling by pacemen Steyn and Vernon Philander.

Only wicketkeeper Matthew Wade saved his side from total humiliation in front of the home crowd, top scoring with 68.

Left-arm spinner Robin Peterson (3-44) cleaned up the tail as South Africa held a 62-run lead before starting their second innings.

Alviro Petersen was caught and bowled by Mitchell Johnson for 24. But Amla and Smith toyed with the attack, putting on 178 before Smith was brilliantly caught by Lyon running in from the boundary. Jacques Kallis end the day not out on 17, with Amla on 99.

The hosts, who drew the first two matches, must win to usurp South Africa at the top of the International Cricket Council Test rankings.