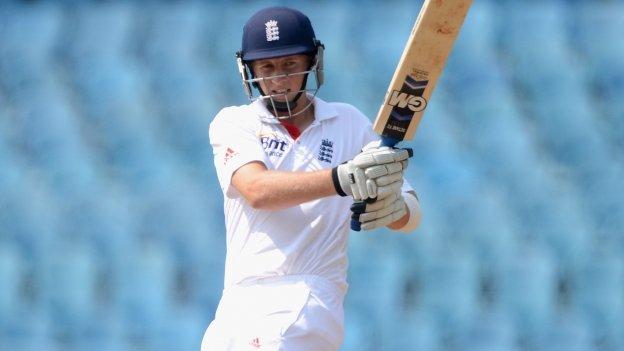 Joe Root is hoping he has done enough to earn his England debut on the current tour in India, having scored 166 in a warm-up match.

The 21-year-old Yorkshire opener compiled the runs against DY Patil Academy for the England Performance Programme (EPP) side this week.

"It was crucial I took the opportunity and have the weight of runs behind me," he told BBC Sport.

"If I said I wasn't disappointed not to play in the first Test, I'd be lying."

Root lost out on a Test debut to Nick Compton in the first Test and also missed England's series-levelling victory in the second Test after Jonny Bairstow was called in to replace Ian Bell, who had gone home for the birth of his first child.

Bell is back with the team for the third Test, which starts on Wednesday in Kolkata.

"Everyone needs time in the middle, especially when you've not been playing," added Root.

"I'll just be doing everything I can in the nets, working with all the coaches to try to improve my game and take as much from the tour as possible - but also to make sure if required I'm ready to go."

England are level in the four-Test series after Alastair Cook's side defeated India by 10 wickets in the previous Test - it was only their second Test win in India in 14 matches since 1985.

"Obviously, we're on a massive high at the minute," said Root.

"Everyone's in a really good place, and really looking forward to what's to come here in Kolkata."