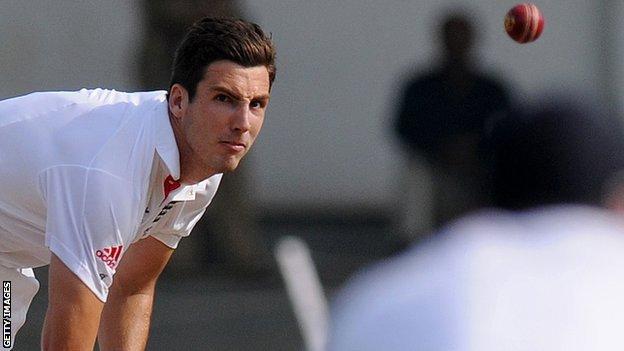 England fast bowler Steven Finn says he is available for the third Test against India, which starts on Wednesday.

A thigh injury has kept Finn out of the series, which is level at 1-1, but the 23-year-old came through a net session at Eden Gardens on Monday.

"My guess is England will make more changes than India. I expect Bell to come back in instead of Bairstow - that is hard on him but Bell is back - and I would expect Finn to replace Broad. I think India will revert to playing two spinners and two seamers, maybe with Sharma coming in for Harbhajan. It is winter here and the match starts at nine in the morning which means a bit of dew around. I think even India like to see seamers."

Finn is in contention to replace vice-captain Stuart Broad, who has not taken a wicket in the first two Tests.

Broad has taken 40 Test wickets in 2012 but has struggled of late. Finn took 4-50 in 16 overs during the England Performance Programme's victory over the DY Patil Academy last week.

India captain Mahendra Dhoni reportedly asked for the pitch in Kolkata to help the spinners from the first day.

Dhoni's request was described by Mukherjee as "immoral", which led to the Board of Control for Cricket in India (BCCI) calling in another groundsman to "assist" Mukherjee - a move which led to him announcing he was going on a month's sick leave.

But Mukherjee, who has been the groundsman at Eden Gardens for 20 years, was back at the ground in Kolkata on Sunday stating that any differences had been "sorted out".

India have scored more than 600 in their last three Tests in Kolkata , winning two and drawing one, but it is thought Dhoni is keen to have a result wicket.

"If Steven Finn is fully fit and bowling well then England should pick him, but it's difficult to judge how well he is bowling. I know Stuart Broad can frustrate but I would probably be inclined to give him another go. I would be tempted to give Jonny Bairstow another game as Samit Patel has not done much so far in the series."

Test Match Special analyst and former England spinner Vic Marks said the bowlers' footprints on the way to the crease were still clearly visible, but did not anticipate the ball turning quite as much as it did in Mumbai, where England's spinners helped the tourists seal a 10-wicket win to level the four-Test series.

England batsman Jonny Bairstow says he expects no issues with the pitch.

"It looks all right, it looks good. It's obviously a pitch the Indians have prepared like the last two Tests," said Bairstow.

"We know it's going to be a tough challenge but the spirits are very high in the camp and we are pleased with our preparations so far."

The England batsman may not feature in the third Test as Ian Bell has returned from paternity leave and could take his place.

"Naturally you are going to be disappointed but that's with any selection of any game," said Bairstow.

Squads for the third Test: