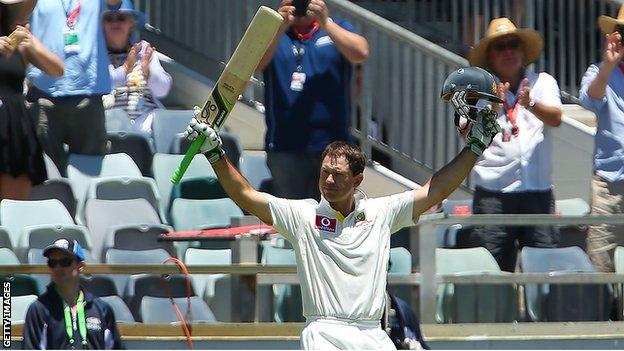 Ricky Ponting's emotional final match for Australia ended in defeat as South Africa wrapped up a series-clinching 309-run victory in the third Test.

The 37-year-old, who announced his retirement before the match, was caught by Jacques Kallis at slip for eight off Robin Peterson.

Set a notional 632 for victory, Australia were bowled out for 322 on the fourth evening in Perth.

"It's not the way I wanted to finish," said Ponting, playing his 168th Test.

The second highest run-scorer in Test history was given a guard of honour by the South Africa team as he walked to the crease, instigated by captain Graeme Smith.

"I was a bit embarrassed but it was an amazing gesture by Graeme," added Ponting.

"I have tried to stay away from watching and listening to everything about my retirement this week. It's not unfolded the way I would have liked."

His final innings lasted just 23 deliveries and 39 minutes before he was well held by Kallis as he attempted to force a shot off the back foot.

The South Africa players shook Ponting's hand as he left the field, and he turned to wave his bat to the crowd as the big screen showed the words "Thanks Ricky".

Widely regarded as one of the greatest players in history, Ponting won the World Cup three times - twice as captain - and led Australia to a joint record 16 successive Test wins.

After the match, he received a standing ovation during a lap of honour as he was hoisted aloft by team-mates Michael Clarke and David Warner.

South Africa's 1-0 series victory keeps them top of the International Cricket Council Test rankings and means England cannot reclaim the number one spot even if they win their series against India 3-1.

The series defeat was Clarke's first since taking over from Ponting as Test captain last year.

Australia resumed on 40 without loss but Warner fell to the second ball of the day for 29.