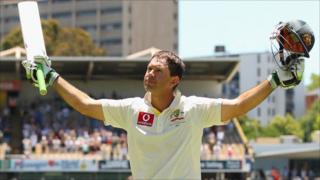 Australia's most successful captain was dismissed for just eight in his last appearance as South Africa wrapped up a series-clinching 309-run victory in the third Test in Perth, with Ponting commenting afterwards that the game was the "toughest" he has ever played in.

Only India's Sachin Tendulkar has scored more Test runs than Ponting, who ends his career on 13,378 from 168 matches.