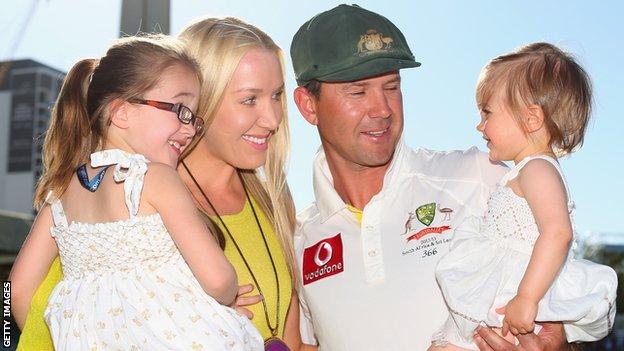 Ricky Ponting says he has no regrets about retiring after his final game for Australia ended in a heavy defeat to South Africa in Perth.

Ponting scored eight runs in his final appearance at the crease for his country to end a glittering Test career with 13,378 runs in 168 Tests.

"The decision to walk away was a pretty easy one," said Ponting after South Africa's series-clinching 309-run win.

"I'm a realist and I realise now that my best cricket is probably past me," added Ponting, the second highest run-scorer in Test history behind Sachin Tendulkar, after South Africa secured victory on the fourth day.

"As hard as I have tried over the last couple of years to find my form again and re-establish myself, I haven't been able to do that."

On a highly emotional day at the Waca, Ponting was given a guard of honour by the South Africa team as he walked to the crease, instigated by captain Graeme Smith.

The 37-year-old, who announced his retirement before the match, lasted just 23 deliveries and 39 minutes before he was well held by Jacques Kallis as he attempted to force a shot off the back foot from Robin Peterson's bowling.

Former England captain Michael Vaughan on Twitter: "The best batsman I had the privilege to play against was Ricky Ponting. Australian cricket will not be the same without him. Punter played better against me than Sachin Tendulkar did. Both are incredible players, but if I had to pick one it would be Ricky."

England wicketkeeper Matt Prior on Twitter: "Congrats to Ricky Ponting on an amazing career. One of, if not the, best batsmen I've ever played against and a fierce opponent."

The South Africa players shook Ponting's hand as he left the field, and he turned to wave his bat to the crowd as the big screen showed the words "Thanks Ricky".

After the game, he received a standing ovation during a lap of honour as he was hoisted aloft by team-mates Michael Clarke and David Warner.

Ponting's wife, Rianna, and daughters Emmy and Matisse, were among the crowd of 7,166.

"It would have been nice to have played one more Test but the decision has been made and I'm disappointed not to have contributed more this week," added Ponting, who ended the match with a total of 12 runs.

"It's probably been the toughest Test match I have played."

Clarke urged Cricket Australia to use three-time World Cup-winner Ponting's vast knowledge and experience to help the country in the future.

"He's one of the greatest players I've been lucky enough to play with," he said.

"I've said before I hope Cricket Australia do everything in their power to keep him involved in this great game because he's one of a kind and I think the game needs him."

Meanwhile, Smith explained the decision behind South Africa's guard of honour for Ponting.

"It was just a sign of respect for someone who has given the game so much," said the South Africa captain.

"I'm sure we're all going to miss Ricky as an opponent.

"I just told him he deserved everything that comes his way and can be proud of everything he's achieved."