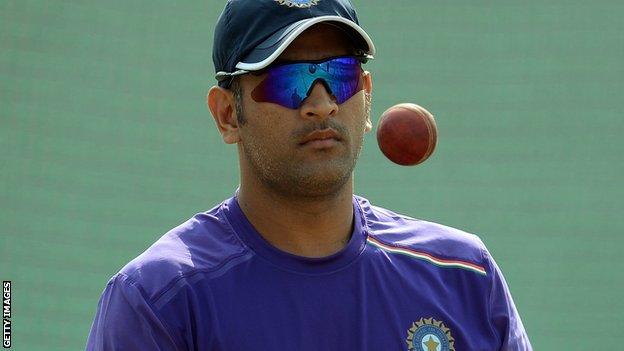 India captain Mahendra Dhoni is predicting a good wicket that will not unduly favour spin when his team play England in the third Test in Kolkata.

Dhoni was recently accused by the groundsman at Eden Gardens of asking for a dry pitch that will assist spin.

But Dhoni said ahead of the start on Wednesday: "The wicket looks good. We'll have to see whether anything happens. It depends on clay content.

"I don't think it will be much help for the spinners initially."

The four-Test series is level at 1-1 with two matches left to play. India won the first Test in Ahmedabad by nine wickets, but England responded by winning the second in Mumbai by 10 wickets.

And the 31-year-old insisted that fast bowlers will play a crucial role in what could prove to be a decisive match.

"The fast bowlers at this time of year get a bit of swing on the ball both at the start of play and before stumps," he added.

"I think the role of fast bowlers will be very crucial in this game."

Ahead of the encounter, Dhoni reportedly asked for the Kolkata pitch to help the spinners from the first day.

Groundsman Prabir Mukherjee described the request as "immoral" - but has since resolved his concerns.

Dhoni did not confirm or deny that he had made any demands on Mukherjee regarding the pitch, despite being asked to clarify whether the reports were true.

But the Board of Control for Cricket in India (BCCI) did call in another groundsman to "assist" Mukherjee in the build-up to the Test - a move which led to the latter announcing he was going on a month's sick leave.

Mukherjee, who has been the groundsman at Eden Gardens for 20 years, was back there on Sunday stating that any differences had been "sorted out".

However, Dhoni did admit that he was keen to play the Test on a pitch that was likely to ensure a result.

"If you come to India, why do you want to play on wickets that are flat for the first three or four days? And sometimes, we have seen that even five days are not enough to get a result.

"I feel the challenge is to play on tracks that turn and assist the spinners. It doesn't matter if we lose a few games or if we win the series, because that will be the crucial thing.

"A cricketer who has played for five or six years can say: 'OK. I went to the sub-continent and the wickets were turning and bouncing. I scored runs or I failed.' Whatever it may be."

Squads for the third Test: