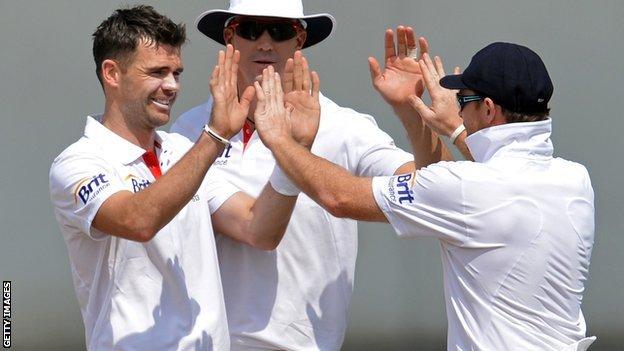 England's bowlers again made light of losing the toss as the tourists had the better of the first day of the third Test against India in Kolkata.

James Anderson took three wickets and Monty Panesar two to restrict the home side to 273-7.

England were outstanding in reducing India to 273-7. They bowled tightly on a pitch that was giving them nothing, building pressure and relying on Indian mistakes, of which there were plenty.

Gautam Gambhir made 60 before Sachin Tendulkar led the India fightback with a battling 76.

But Anderson had Tendulkar caught behind and bowled Ravichandran Ashwin late on to put England on top.

A day that had echoes of the opening of the second Test - India reached 266-6 after winning the toss in Mumbai on the way to a 10-wicket defeat - might have been even better for England had Steven Finn not fumbled a chance to run out Ashwin.

But that was one of the few mistakes by the tourists, who were rewarded for patient, skilful bowling and sharp fielding.

By contrast, India were often masters of their own downfall, with the comical run-out of Virender Sehwag setting the tone for the soft dismissals that followed.

As a result, the hosts' chances of making best use of a benign pitch showing no great pace look to rest on the shoulders of Dhoni, a skipper under pressure after the thrashing in Mumbai and the pre-match controversy surrounding the pitch at Eden Gardens.

James Anderson has now dismissed Sachin Tendulkar eight times in Tests to equal Muttiah Muralitharan as the most successful bowler against the Little Master.

Dhoni would have faced further criticism had his first-ball swipe at Graeme Swann not bounced just in front of Samit Patel at mid-wicket but, after that, he showed the same determined application of Tendulkar before him to move to 22 not out.

Tendulkar had made only 29 runs in the first two matches of the series and again looked scratchy in the early part of his innings, regularly playing and missing as Anderson and Finn - recalled to the side after injury in place of Stuart Broad - found some reverse swing.

With Panesar also tying the veteran down, he was restricted almost exclusively to nudges behind square on both sides of the wicket, but a fifth-wicket partnership of 79 with Yuvraj Singh looked to be tipping the balance towards India.

Tendulkar hit his first two balls after tea for four to move to a half-century and, with Yuvraj planting Panesar for a straight six, India seemed intent on attacking in the final session.

Even after Yuvraj tamely offered a simple catch to Alastair Cook at short extra cover off Swann, Tendulkar was looking more fluent as he moved towards what would have been a first Test hundred since January 2011.

"In the last five matches here India have won four of them and have made at least 400 in their first innings every time. Everyone has been telling me what a good pitch it is but India didn't make use of winning the toss. They weren't allowed to by the England bowlers who formed an excellent unit. Anderson and Panesar in particular were excellent, but several of the Indian batsmen are not in good form."

But, from the first ball after drinks, the impressive Anderson got a deserved second wicket as Tendulkar nibbled at an away-swinger, with wicketkeeper Matt Prior taking a diving, one-handed catch.

If Tendulkar was got out, almost all that went before him aided the tourists, with Gambhir, who rarely looked comfortable, culpable not once, but twice.

The left-hander inexplicably turned down an easy three to leave Sehwag stranded by Finn's throw and, after Cheteshwar Pujara was bowled playing back to Panesar, Gambhir flashed a cut at the same bowler and was well held at slip by Jonathan Trott.

Virat Kohli's poor form continued as he guided Anderson to Swann at second slip, at which point England were in the ascendancy.

Despite the resilience of Tendulkar and Dhoni, Anderson returned in the penultimate over of the day to remove Ashwin's middle stump, leaving England three wickets to mop up on day two with a new ball that is only four overs old.