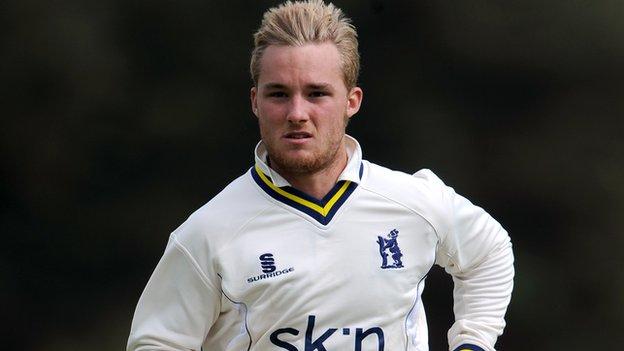 Warwickshire batsman Laurie Evans has signed a new two-year contract, tying him to the county champions until the end of the 2014 season.

The 25-year-old Londoner, who first moved to Edgbaston on loan from Surrey in 2010, has struggled to find a place in the Bears' first XI.

But he made a breakthrough last summer, playing three one-day games and eight times in the Twenty20.

"Laurie has a great future ahead of him," said Bears coach Ashley Giles.

"I'm delighted that he's committed to Warwickshire to fight to become an established member of the first team.

"He has already highlighted that he's capable of match-winning performances in the T20. We're confident that he can demonstrate this in other formats of the game."

Evans, who was part of the Bears side which won the Second XI Championship in 2011, starred in the Twenty20 win over Northants at Edgbaston with a match-winning 68 not out.

"Whilst opportunities in the senior team have been limited for me to date, I wanted to stay with such a big club and fight for my place," said Evans.

"If I can keep working hard and score runs in pre-season then hopefully a run in the County Championship team is just around the corner.

"The strength of our squad gives us a great chance of winning silverware in all formats."