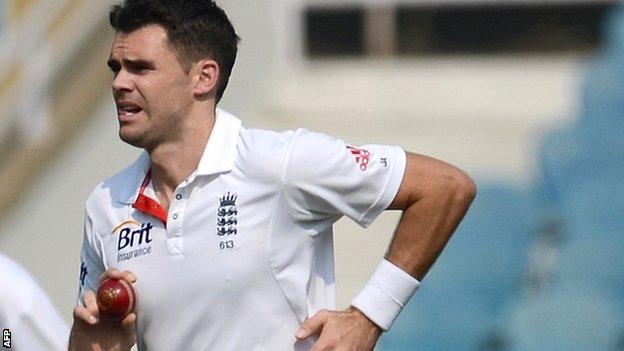 England seamer James Anderson said the wicket of Sachin Tendulkar was the key moment as the tourists reduced India to 273-7 on day one of the third Test.

Tendulkar, who made only 29 runs in the first two Tests, top-scored with 76 before he edged behind off Anderson.

"England were outstanding in reducing India to 273-7. They bowled tightly on a pitch that was giving them nothing, building pressure and relying on Indian mistakes, of which there were plenty."

"I was really happy getting him because it was a really crucial time for the team, he looked set," Anderson said.

"It seemed a pretty good pitch so to get seven wickets and keep them to 270 I thought was a brilliant effort."

England's 10-wicket victory in the second Test last month was inspired by the spin of Monty Panesar and Graeme Swann, who took all but one of the 20 wickets between them, but Anderson was the pick of the bowlers on day one in Kolkata with 3-68.

"I'm delighted with it," the 30-year-old told BBC Sport. "I'm sure I'll be reminding people of that when I've retired in a few years but the important thing today was getting him out in that situation. He was looking threatening and we needed a wicket at that time.

"All four of us bowled pretty well. We bowled well with the new ball and then as the innings went on it started reverse swinging. Finny [Steven Finn] was unlucky not to get a wicket and Monty was fantastic again."

Panesar took 2-74 and celebrated his wickets in extravagant fashion. Asked about the spinner's theatrics, Anderson said: "He seems to come up with a new celebration every game but as long as he keeps getting wickets we don't really mind what he does."

With the four-match series delicately poised at 1-1, Anderson added: "We need a good start in the morning with the ball.

"We're lucky we've got a newish ball so we can hopefully make some early inroads and then we've got to bat really, really well and get a huge first-innings total if we can."