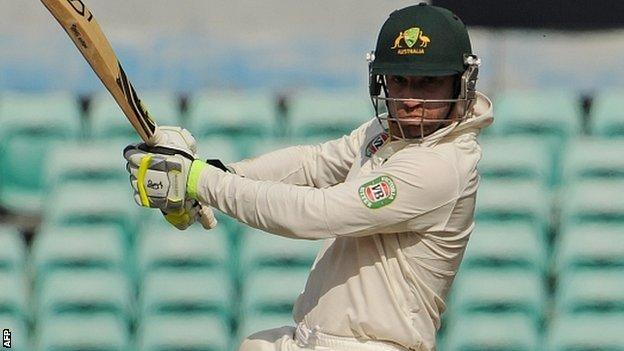 Phil Hughes has been recalled to the Australia squad to replace the retired Ricky Ponting for the start of the three-Test series against Sri Lanka.

Hughes, 24, was preferred to Usman Khawaja, Rob Quiney and Alex Doolan in the 12-man squad for the first Test, starting in Hobart on 14 December.

Ponting retired after the 309-run loss to South Africa in Perth on Monday.

Hughes, who has a Test average of 34.58, last played in the defeat by New Zealand at Hobart in December 2011.

The left-handed batsman spent last summer in England with Worcestershire, having twice been dropped from the Australian team after a promising start to his international career in 2009.

"Most people have some critics but you would have to travel to all corners of the earth to find a person who has met Rick and doesn't admire and love him for everything he is."

He scored 75 on his Test debut against South Africa and followed that up with hundreds in each innings of his second - becoming the youngest batsmen to post two centuries in a Test match.

Selection chairman John Inverarity, the former Warwickshire coach, said that Hughes' relatively young age was a factor in the selection.

"The national selection panel holds the view that he, having just turned 24, is a very significant part of the future," said Inverarity. "It was considered to be the right time and circumstances for him to re-establish himself."

Inverarity said the batting order for the Test would be decided by captain Michael Clarke, with Hughes likely to slot in at number three in a reshuffle of the top order.

Ponting batted at four in the South Africa series, but it is likely that all-rounder Shane Watson will move back down the order after batting at three in Perth.

Australia will also face Sri Lanka in the Boxing Day Test at Melbourne and the New Year's Test in Sydney.