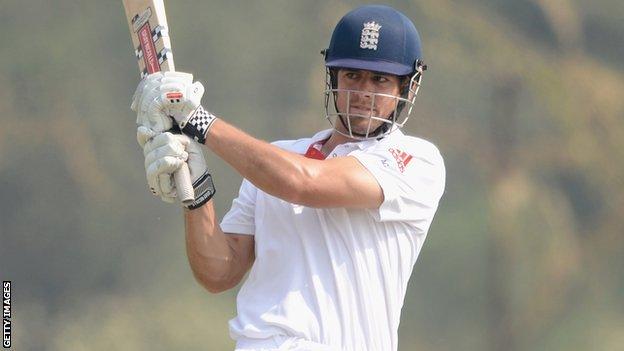 Captain Alastair Cook set a record for England Test centuries with his 23rd as the tourists assumed control of the third Test against India.

Cook made 136 not out as England reached 216-1 in reply to India's 316 all out at the close of day two at Eden Gardens in Kolkata.

The Essex left-hander reached the milestone at the age of 27 years and 347 days, knocking Sachin Tendulkar off top spot.

Cook, whose Test career began with a hundred against India in Nagpur in 2006, has now scored centuries in all five of his Tests as captain.

He brought up his third ton of the series off 179 balls with a sweep for two off spinner Ravichandran Ashwin during an opening partnership of 165 with Nick Compton.

While his England team-mates and coaching staff rose in unison on the balcony to salute their skipper, Cook removed his helmet, looked skyward and punched the air with both hands.

Cook is still only joint-20th in an all-time list of Test centurions headed by Tendulkar with 51, but should have many years ahead of him to move up the table.

"I don't think it will be such a big deal to him," said Boycott on Test Match Special. "At his age he's going to get quite a lot more unless he has a serious illness or injury.

"He's in the best years of his life and will automatically play, he has a good technique and should be well on the way to 40 hundreds by the time he's finished."

Cook also surpassed Andrew Strauss, the man he succeeded as Test captain before the India tour, to move up to ninth in the list of England's all-time highest run-scorers with 7,048. Graham Gooch holds the record with 8,900.

Cook was dropped by Cheteshwar Pujara at slip off the bowling of Zaheer Khan on 17 but did not offer a further chance in a confident and controlled innings featuring 19 fours and a six.

He and Compton, Strauss's replacement at the top of the England order, put the tourists in a strong position to go 2-1 ahead in the four-match series as they target a first victory in India since 1985.

Somerset's Compton batted circumspectly at first before opening up after tea to reach his first Test fifty.

His 137-ball knock was eventually brought to an end when he missed an attempted sweep at Pragyan Ojha and was trapped lbw.

Jonathan Trott then showed signs of playing himself into form, easing to 21 not out in an unbroken partnership of 51 with Cook.

Earlier, England made relatively light work of wrapping up the India tail as Monty Panesar had Zaheer Khan trapped lbw for six and then rearranged Ishant Sharma's stumps.

Captain Mahendra Dhoni smashed the England spinner for two sixes en route to a half-century before he was last out, fending a Steven Finn bouncer to Graeme Swann, who ran forward to take a low diving catch.