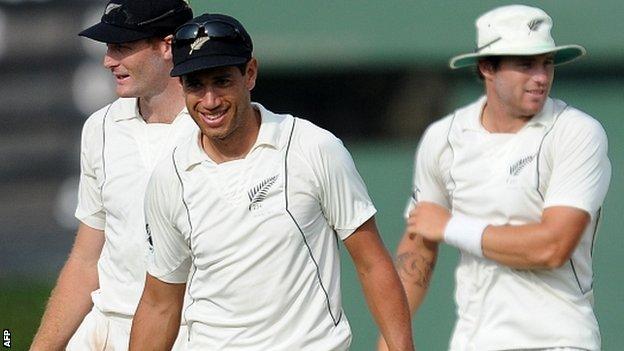 Ross Taylor has been replaced as New Zealand captain by Brendon McCullum after refusing to give up the roles in the shorter forms of the game.

Taylor, 28, had been asked to remain Test captain but hand over the one-day and Twenty20 reins to 31-year-old wicketkeeper-batsman McCullum.

Taylor, who scored 142 and 74 to help New Zealand tie the Test series in Sri Lanka, will take a break from cricket.

He will miss the tour of South Africa, which starts later this month.

Taylor's batting average improved after he took over the captaincy. In his 13 Tests as skipper he scored 1,047 runs at 49.85 with three centuries, while he had a career average of 43.57 in 43 Tests overall

The announcement ended days of speculation about Taylor's future, with local media reporting a split between head coach Mike Hesson and the batsman.

New Zealand Cricket boss David White said Hesson had recommended Taylor step down from the captaincy of the shorter formats as part of a review following the team's tour of Sri Lanka, where they drew the Test series 1-1.

"We regret that Ross Taylor has declined the opportunity, therefore McCullum has been appointed as Black Caps captain for all three forms of the game," said White.

"He thought about it long and hard and he said that he would like a break to spend time with his family and we've agreed to that and we respect it."

Taylor's decision means New Zealand will be without their top batsman for at least the two-Test tour of South Africa and adds to the team's problems with former skipper Daniel Vettori almost certain to miss out because of an Achilles injury.

New Zealand will then face home and away series against England in 2013.

"It's not ideal and we would be a stronger team with Ross Taylor in it," White said.

Taylor replaced Vettori as captain in June last year, and although he guided New Zealand to a Test win in Australia, was under pressure in 2012.

His team slumped to Test series defeats at home to South Africa and then away to West Indies and India.

His record in the shorter formats was also questioned after his team went out of the World Twenty20 tournament in Sri Lanka at the Super Eights stage and lost 10 of their 14 completed one-day internationals this year.

McCullum, who had been considered a strong candidate to take over from Vettori, has played 70 Tests, 206 one-day internationals and 54 Twenty20 internationals, respectively averaging 35.63, 30.24 and 36.00.