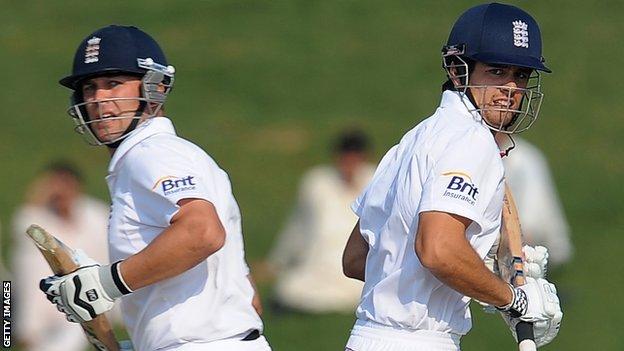 England tightened their grip on the third Test against India, although Alastair Cook missed out on a double century on day three in Kolkata.

Cook was run out in bizarre fashion on 190 as he moved to avoid Virat Kohli's throw before making his ground.

The captain had earlier shared a stand of 173 with Jonathan Trott (87), while Kevin Pietersen added a belligerent 54.

"England haven't got quite as many runs as I would have liked but if the lead is 200-odd it may tempt India to go for it a bit more. If they are positive, it opens up a channel for England because they may give us a bit more chance of getting them out. There are plenty of runs around but if the odd ball turns you can take wickets. If England bowl like they did in the first innings, they have a very good chance of winning."

The late flurry pushed England towards a position from which they can earn a 2-1 lead in the four-match series and potentially secure a first victory in India since 1985.

The swift progress of the seventh-wicket pair was also in contrast to the rest of the day, as India's bowlers stuck to their task well to prevent the tourists accelerating away in the opening two sessions.

However, on a pitch that remains good for batting despite increasing signs of turn and uneven bounce, wickets were usually only the result of batsman error and England will want further runs to be added by Prior on the fourth morning to feel confident of not facing a tricky final-innings chase.

The wicketkeeper was characteristically busy at the crease to punish a tiring India attack, building on the platform set by Cook and Trott earlier in the day.

With England resuming on 216-1, the second-wicket pair made steady progress through the morning session, seeing off the new ball in the process.

Cook, who had scored an England record 23rd Test century on day two, was less fluent on his return and was reprieved on 152 when Ishant Sharma put down the simplest of return catches.

Trott had struggled in the first two Tests of the series but showed more authority than his captain, driving in front of square on both sides of the wicket and regularly sweeping the spinners.

It was, however, the Warwickshire man who was first to go, getting a thick edge when left-arm spinner Pragyan Ojha found some sharp turn, with wicketkeeper Mahendra Singh Dhoni taking a good catch.

With India seemingly now out of ideas on how to dismiss Cook as he approached 550 runs for the series, the home side eventually removed the visiting skipper in the most unusual way.

Returning to the non-striker's end as Kohli fielded off Pietersen at square leg, Cook took action to avoid a shy at the stumps before grounding his bat.

However, the throw hit directly with Cook still short of the crease and, after the umpires consulted, he was given run out for the first time in his first-class career.

That was Pietersen's cue to accelerate either side of tea - dancing to strike Ojha for a straight six before the break and hitting the same bowler for three successive fours afterwards.

Ian Bell tried to match his partner's intent, but was caught behind wafting at Sharma, with Pietersen then falling lbw as he attempted to sweep Ravichandran Ashwin.

After Samit Patel's breezy 33 was ended by an edge to slip off Ojha, India may have had hopes of running through an England tail elongated by the absence of Stuart Broad.

But Prior, sweeping and cutting, raced to 40 in a 46-ball stay that included an imperious pull for a maximum off Sharma.

And, in tandem with Swann, he took advantage of some weary bowling to push England's lead towards 200.