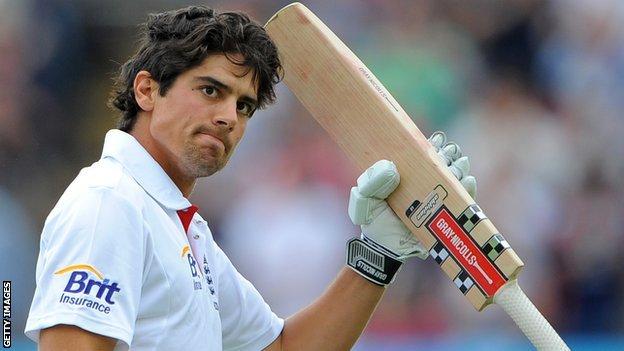 Alastair Cook has been breaking records galore during the third Test against India in Kolkata.

The England captain became his country's all-time record century-maker and the youngest batsman of any nationality to pass 7,000 runs on Thursday.

On Friday, he looked set to record his third double century in Tests but was run out in bizarre fashion for 190 when he failed to ground his bat before swerving to avoid Virat Kohli's throw at the stumps.

It was the first time the 27-year-old opener had ever been run out in his first-class career.

Here are some of the amazing statistics from this match and his Test career so far.

• 547 runs in five innings, the highest aggregate by an England captain in a series in India, surpassing Ted Dexter's previous record of 409 runs in 1961

• Batted for total of 26 hours and one minute

• Cook, who passed 7,000 runs in his 151st innings, is the third-fastest England batsman to reach the mark after Hammond (131 innings) and Pietersen (150 innings)

• He is one of only five overseas batsmen to score three or more centuries in a series in India - the others are Everton Weekes, Garry Sobers, Ken Barrington and Hashim Amla

• 29 - the number of Test half-centuries he has made, giving a conversion rate of 44% from fifties to hundreds

• Joint-20th - in the all-time list of Test centurions. Sachin Tendulkar leads the way with 51