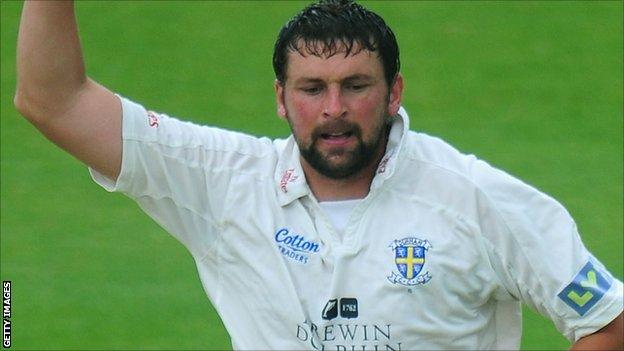 Steve Harmison has admitted he has a fight to win a place in the Durham bowling attack for the forthcoming County Championship season.

The 34-year-old seamer was loaned out to Yorkshire for part of last season as fellow bowlers Graham Onions and Chris Rushworth flourished in his absence.

"It's a tough team to get into now," the ex-England man told BBC Newcastle.

"There are some good cricketers and the most important thing for me is Durham, but I'm fighting to stake a claim."

He added: "I'm striving to give 100% and trying to get in the team. Hopefully in my benefit year if we can win something, that might be the end of me, because that would be the best way to go out."

Come September, if Durham win something then I will be a very proud man, and whatever I achieve in that time is irrespective

Harmison's 2012 campaign was hampered by an ankle injury that affected his pre-season preparations, a campaign that limited the two-time Ashes winner to just 14 first-class wickets.

However support from head coach Geoff Cook, and a benefit year remain incentives and motivations for the year ahead.

"I read what Geoff said - it is in my hands," Harmison added.

"The next four to five months is making sure when it comes to the start of the season I start with a ball in my hand and not carrying drinks.

"Come September, if Durham win something then I will be a very proud man, and whatever I achieve in that time is irrespective.

"It's about the club going forward and restoring pride to North East cricket after a disappointing last year."